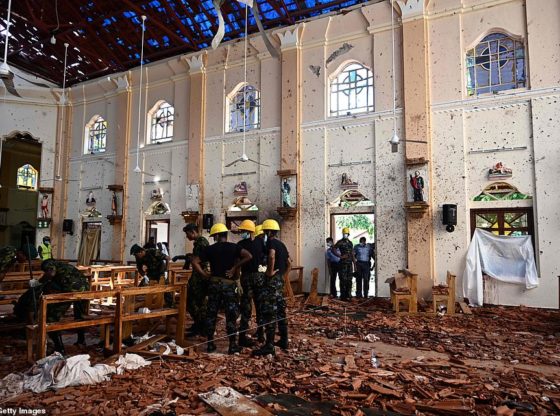 More than 290 people were killed and 500 injured in 8 bombings that targeted Christian churches and four 5-Star luxury hotels throughout Sri Lanka on Easter Sunday during what is considered the holy week in Christianity.

The blasts are said to have occurred early in the morning as prayer sessions were starting. A total of 7 churches and 4 luxury hotels were targeted.

According to local media, the first six explosions were all occurred within a short period of each other early in the morning just as church services were starting.

The first blast reportedly took place around 08:45 am during a prayer session at a Catholic Church, the St. Anthony’s Shrine in Colombo killing at least dozens.  The second blast targeted Table One Restaurant at the Shangri-La Hotel, a favourite tourist hotspot.

An hour later, three other Catholic churches and three upscale hotels were targeted by Islamists suicide bombers in a country with a long history of violence and still recovering from an almost three decades-long civil war that ended 10 years ago.

Next to be targeted was St. Sebastian’s Catholic Church in Katuwapitiya, north of Colombo where dozens were killed.  Another 25 worshippers died after an explosion at the Zion Evangelical Church in Batticaloa in Eastern Province.

In addition to the Shangri-La Hotel, other targeted hotels in Colombo were the Kingsbury, the Cinnamon Grand and the Tropical Inn near the national zoo.

An eight explosion was said to have occurred later at a house in Colombo that had been the subject of Police raids.

Although local Islamist terrorist groups claimed responsibility for the sophisticated and well-coordinated attacks, the U.S. and other western security experts believed they may have had some assistance from ISIS or other transnational, global recognized terrorist organizations like al-Qaeda as they neither had the capacity nor the expertise to execute such attacks.

Later on Monday, as predicated, ISIS claimed responsibility for the attacks.

The attacks claimed 35 foreign victims among Americans, 5 British nationals including 2 with dual-US-UK nationality including 3 Indians, 2 Turks, 2 Danish, one Portuguese as well as some Dutch and Chinese nationals.

While U.S. Secretary of State Mike Pompeo acknowledged the death of American nationals, he did not give any details.

Global condemnation of the terrorist attacks was quick.  Major Heads of State across the world condemned the targeted bombings of Christian Churches by radical Muslim terrorists including President Trump who sent his country’s “heartfelt condolences” to the Sri Lanka people via Twitter.

Indian Prime Minister Narendra Modi said there was “no place for such barbarism in our region” while Pope Francis addressing people in St. Peter’s Square said the following:

“I wish to express my affectionate closeness to the Christian community, hit while it was gathered in prayer and to all the victims of such cruel violence.”

Turkish President Tayyip Erdogan who did not label the attacks as “terrorist attacks,” or identify the perpetrators as “radical Muslim terrorists” simply referred  to the targeted bombing as “an assault on all of humanity.

Similarly, despite this being the worst attack on Christians and Christianity by radical Muslim terrorists since 9/11, Democrats have been unable to outrightly condemn the attacks  as “terrorist attacks” by “radical Muslim perpetrators” against Christians, a growing norm in the Middle East, East Asia and some parts of Africa.

Unlike the recent New Zealand mosque attack by a self-proclaimed, Trump-hating Australian White-Nationalist, Democrats and the global liberal mainstream media were quick to condemn that attack by “White supremacist terrorists” and linking it to “Islamophobia” and “racism”.

Furthermore, they even tried to blame the massacre to President Trump despite the fact that the perpetrator was an avowed Trump-hater and critic.

Instead, the blatant hypocrisy by Democrats and liberals was soon exposed in the manner in which they responded to this deadly attack on Christians.

Known for their anti-Christianity stance, led by Barack Obama and Hillary Clinton, Democrats and some liberals rather than call it for what it is: a terrorist attack on Christian churches by radical Muslim terrorists, they instead referred to the deadliest attacks on Christians since 9/11 as an attack on “Easter Worshippers,” not “Christians”.

Despite the condemnation and criticism, Democrats including presidential hopeful Bernie Sanders have remained silent and have neither identified the perpetrators correctly nor their victims the “Christians” and “Christian Churches”.

In a country that’s mainly Buddhist, last year in February-March there were a series of religious clashes between Buddhists and Muslims.

The Christian community had already felt under pressure in Sri Lanka in recent years.

According to the National Christian Evangelical Alliance of Sri Lanka (NCEASL), an organization which represents more than 200 churches and other Christian organizations in the country, some 86 verified incidents of violence, discrimination and threats against Christians were recorded last year.

This year, the NCEASL recorded 26 such incidents, including one in which Buddhist monks allegedly attempted to disrupt a Sunday worship service, with the last one reported on March 25.

The Easter holiday or Passover is one of the most important Christian holidays where Christians all over the world celebrate the significance of the crucifixion, death and resurrection of the Lord Jesus Christ on Easter and throughout the Holy week.