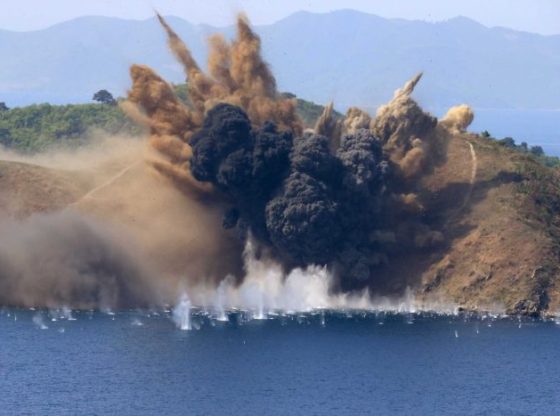 SEOUL – North Korea has just fired unsuccessfully a ballistic missile into the Sea of Japan in a provocative measure against the United States.  The test-launch of what appears to be a KM-17 liquid-fuelled ballistic missile occurred while the UN Security Council was meeting to discuss the North Korean threat and aggression as well as urge new sanctions.

The latest test launch by North Korean is seen as an attempt to provoke the Trump Administration into a confrontational response by the regime in Pyongyang.  Emerging from Airforce One, President Trump declined to respond earlier when asked of the recent provocation and how he plans to react.

However, he did tweet later that North Korea had “disrespected the wishes of China and its highly-respected President when it launched, though unsuccessfully,” a ballistic missile.

U.S. Pacific Command said the missile did not leave North Korean territory, adding that the North American Aerospace Defense Command determined the launch did not pose a threat to North America.  The missile flew for 15 minutes and 45 miles before blowing up, breaking into pieces over the Peninsula and fell into the Sea of Japan.

The United States is working with China and has been urging Beijing to reign in Kim Jong-Un.  During proceedings at the UN Security Council, the Chinese demanded an end to all US military exercises with the South Korean forces and also demanded a removal and an end to the missile defence system (THAAD).

The United Stated has rejected both propositions urging China to be serious in its intervention process.

The US says it is ready to resume aid to North Korea if the regime is willing to surrender its ballistic missiles and give up its ambitious nuclear program, something which appears highly unlikely.

Yesterday in an interview with Reuters, President Trump sounded a cautious warning that a “major, major conflict” with North Korea is possible after the regime fired over 25 live ballistic missiles.