AG Barr: “No Collusion” Between Trump Campaign And Russia 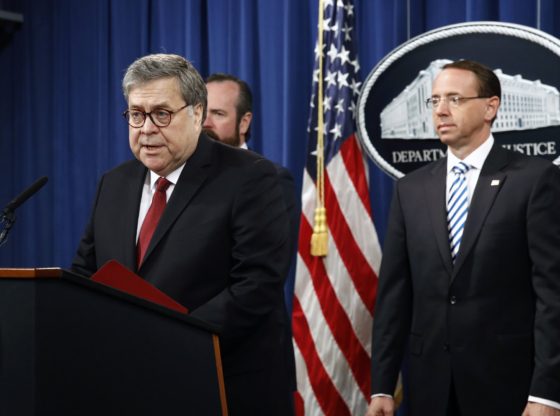 As promised, U.S. Attorney General held a press conference at the Department of Justice on Thursday morning to announce the findings of the Mueller Report on the alleged FAKE Russia Collusion between President Trump, his campaign and the Russians.

Barr told reporters that Mueller found “no collusion” and “no cooperation” between the Trump Campaign and Russia in the 2016 election.

“After nearly two years of investigation, thousands of subpoenas and hundreds of warrants and witness interviews, the Special Counsel confirmed that the Russian government sponsored efforts to illegally interfere with the 2016 Presidential Election, but did not find that the Trump campaign or other Americans colludedin those schemes,” Barr said.

“So that is the bottom line.”

The above findings undercut the narrative that launched the Mueller Investigation in the first place.

“We now know that the Russian operatives who perpetrated these schemes did not have the cooperation of President Trump or the Trump Campaign, or the knowing assistance of any other American.”

President Trump later tweeted a Game Of Thrones-like tweet in caps to celebrate the news.  “NO COLLUSION.  NO OBSTRUCTION. For the haters and the radical left Democrats – GAME OVER.”

He also remarked, “I’m having a good day,” while addressing members of the Wounded Warriors Foundation at the White House to mark what had been undoubtedly the proverbial sword of Damocles hanging over his administration since he assumed the presidency.

AG Barr also pointed out that Mueller and his team reviewed 10 incidences or episodes as part of his investigation into whether President Trump committed obstruction of justice.

After intense examination and debate, Barr and his deputy, Rod Rosenstein “felt that some of the episodes examined did not amount to obstruction as a matter of law.

With Democrats already threatening to issue a subpoena for access to the full, unredacted Mueller Report, AG Barr addressed that issue during the press conference saying he will allow Congress to view the report without redactions with the exception of grand jury information.

The DOJ announced that the partially redacted Mueller Report would be released on Thursday morning, with some portions blacked out to protect Grand Jury material, National Security secrets as well as other information deemed sensitive.