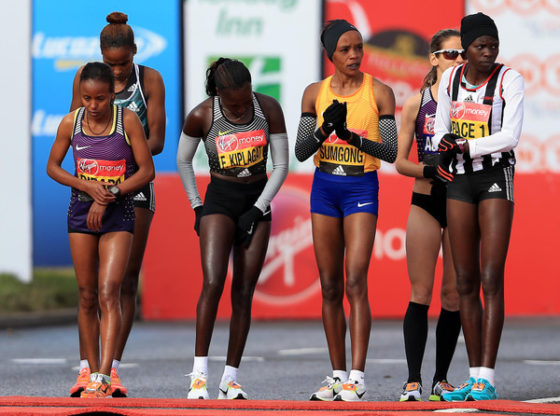 The athlete tested positive for a banned substance called EPO in an out of competition test carried out by IAAF, the international athletics governing body.  The 32 year old who is the first Kenyan female to win Olympic marathon gold was supposed to defend her London title this month on April 23.

While Kenya is known for producing world-class athletes, its reputation has suffered ever since the country was declared in breach of anti-doping rules in Rio 2016.  The country also lost its credibility when its athletes had to go under special testing.

Between 2011 and 2016, more than 40 Kenyan track-and-field athletes failed doping tests.  Among those was 36 year old Rita Jeptoo who in 2014 was banned for 4 years after testing positive for performance-enhancing drug EPO.

The Olympic champion is now the highest profile of dozens of Kenyan athletes to have failed doping tests since the 2012 London Olympics and her case puts the country’s anti-doping failures back in the spotlight.

Right now, Jemima is provisionally suspended and will not be allowed to defend her title while waiting for her second test results.  Should her B-sample test positive, Sumgong is will face sanctions.

“The athletes tested positive for EPO (Erythropoietin) following a no-notice test conducted by IAAF in Kenya,” read the statement.

Sumgong became the first Kenyan woman to win Olympic gold in the marathon at last year’s Rio de Janeiro Games, is the reigning London Marathon champion, and was the points leader in the World Marathon Majors series. She was in line to receive a $250,000  US bonus when the two-year cycle is completed in Boston on April 17. The series said it won’t name a women’s winner until doping officials have resolved her case.

In 2015, the Sunday Times claimed the London Marathon had been won seven times in 12 years by athletes who had recorded suspicious blood scores.

While Kenya remains a dominant player in the World Marathon Majors, the country’s Olympics has been undermined by a series of scandals involving coaches and officials, and its reputation seriously harmed by a spike in doping cases over the last five years.