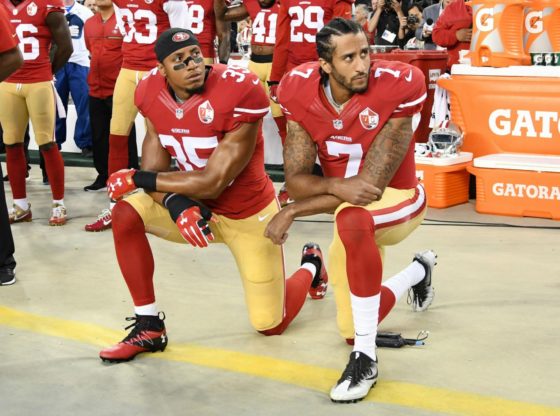 In a victory for President Trump and his aggressive take on the highly politicized, partisan and sensitive issue of protesting the National Anthem, the National Football League (NFL) owners finally approved a new policy to address the deeply polarizing issue which most Americans perceived as an act of unpatriotism by very ungrateful, spoiled and wealthy players against a nation that has made them millionaires.

On Thursday, NFL owners unanimously approved a new policy that would require all NFL players to stand during the National Anthem or else stay behind in the locker room than protest and take a knee in the field when the Star-Spangled Banneris being played.

In addressing the contentious issue that has divided a country and has reached as far as the White House, the owners reached a unanimous decision and consensus without the participation of neither the NFL players nor their union – the NFL Players Association.

Rather than punish individual players or their union for any violations, the new policy would require that a team be fined instead.

News of the new policy was met with immediate skepticism by the NFL Players Association including condemnation and outright outrage by Liberal politicians who were using NFL protests as an extension of their Resist Trump Movement against a President they think shouldn’t have been elected in a bid to galvanize their base for the upcoming November mid-term elections.

That point , however, hasn’t been lost to millions of Americans across who, regardless of their political views or take on President Trump, stand with the President on this issue and have since turned against the NFL.

“We want people to be respectful of the National Anthem. We want people to stand,” said NFL Commissioner Roger Goodell, who has widely criticized for giving in to player and allowing the issue to get out of control.

“That’s all personnel, and to make sure they treat this moment in a respectful fashion. That’s something that we think we owe. We’ve been very sensitive on making sure that we give players choices, but we do believe that moment is an important moment and one that we are going to focus on.”

The NFL Players Association in its response said it would challenge any part of the policy that violates collective bargaining agreements of players.

“The NFL chose to not consult the union in the development of this new ‘policy,’” the NFLPA said in a statement. “NFL players have shown their patriotism through their social activism, their community service, in support of our military and law enforcement and yes, through their protests to raise awareness about the issues they care about.”

In addition, NFLPA added that, “The vote by NFL club CEOs today contradicts the statements made to our player leadership by Commissioner Roger Goodell and the Chairman of the NFL’s Management Council John Mara (co-owner of the New York Giants) about the principles, values and patriotism of our League.”

To NFL owners and NFL Commissioner, the new policy strikes a balance between respecting the views of players who object to standing for the The Star-Spangled Banner and Americans offended by athletes using the National Anthem ceremony to further a political agenda.

However, in brilliant Trumpian fashion, President Trump quickly embraced the Democrats backed Resistance Movement protests against him, quickly turning them into an impressive campaign issue.

In addition to calling for the NFL to fire any player who took a knee in protest of The Star-Spangled Banner, Trump successfully turned most Americans against NFL players and the league itself.

The move led to massive boycotts of the games and merchandise by fans as well as by sponsors, costing the NFL billions of dollars in lost revenue after Trump masterfully turned the issue of protesting the National Anthem and The Flag into patriotism vs. anti-American.

Like a dog with a bone, President Trump hammered the issues every day to the point of pitting NFL owners and players against each other, as well as causing divisions within the league itself.

Former 49ers quarterback, Colin Kaepernick, the poster boy of the Take-A-Knee protest and NFL Resist Trump Movement remains unemployed to date for almost over a year as no NFL owner wants him in their team.

Although other players carried on the cause during the 2017 season after he left NFL, those protests now seem to have lost steam thanks to President Trump and public sentiments against them.