Russia Responds To US Syria Attacks 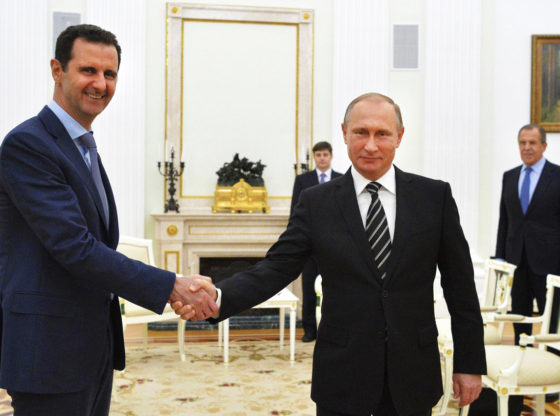 In what is already a volatile relationship between the United States and Russia, tensions have escalated to an all time high after the much publicized, very much resisted and already doomed “Trump-Putin Bromance” was Tomahawked on Thursday.

When America launched its first attack in Syria under darkness, it exposed a world deeply divided between the west and the rest.  Western allies and their Arab counterparts offered support to President Trump’s limited, one-off pre-emptive military strike in retaliation to a chemical attack on civilians including children.

Understandably, both Russia and Syria have strongly to condemned the unilateral military action as an “illegal act of aggression against a sovereign nation” that is provocative, unjustified and criminal.

With Trump warning he will “hit Syria AGAIN” and US Ambassador to the UN reiterating “We are prepared to do more,” it is not surpassing that the Kremlin in an act of defiance warned America that it is “one step from war”.   This statement and following actions have triggered fears of an impending World War III if this conflict escalate any further.

With tensions already at a historic peak, the Kremlin has responded with its own show of force.  It simply suspended the memorandum of agreement between the two countries signed in 2015 when Russia launched its first air campaign inside Syria.

The agreement or military hotline otherwise known as the ‘deconfliction line’ was designed for communication and information sharing to avoid confrontation and mid-air collision of fighter jets over the Syrian airspace.  With this information sharing tool gone, what remains is a very dangerous, volatile situation between two superpowers fully armed with WMDs.  Both Russia and US combined control over 95% of the world’s nuclear weapons.

However, ulike the United States, Russia already has several dozen warplanes and batteries of air-defense missiles on the ground and commands much of the airspace with the Syrian government.

To escalate the situation further, Putin has diverted one of Russia’s strongest warships armed with supersonic cruise missiles to the Mediterranean. The Admiral Grigorovich warship is headed towards two US destroyers already in the region.  He has vowed to protect the Syrian Coast and bolster Syria’s missile defences against any further military raids and bombardments.

What started off as a one-off, targeted strike is threatening to become something that could engulf the world. While Trump has been vilified for suggesting closer ties and engaging the Russians on a foreign policy level, he has remained constant warning that any “shooting war in Syria” could bring the United States into direct conflict with Russia that could ”very well lead to WW3” .

What is clear is that the much hated Trump-Putin bromance was tomahawked the day the US struck Syria.  What is not clear is how far the warmongering Neocons in Washington and Europe will go or what they will do to take advantage of Trump’s preemptive one-off strike to turn it into something more dangerous that could engulf all of us.