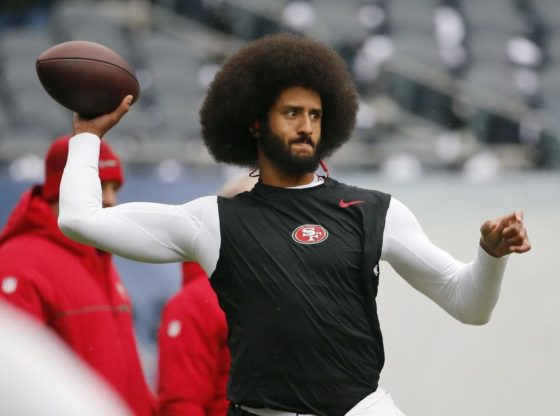 Former San Francisco 49ers quarterback Colin Kaepernick has filed a grievance against the National Football League, accusing the owners of colluding not to sign him.

In a statement posted to Twitter on Sunday evening, attorney Mark Geragos said Kaepernick plans to accuse the NFL owners of violating the Collective Bargaining Agreement (CBA) with the players’ union, which bars collective blackballing of a player.

“We can confirm this morning we filed a grievance under the CBA on behalf of Colin Kaepernick. This was done only after pursuing every possible avenue with all NFL teams and their executives,” Geragos said in the statement.

The lawyer also claimed that the NFL and other pro sports leagues cannot punish “principled and peaceful political protest,” going on to blame President Trump for the purported blackballing.

“Athletes should not be denied employment based on partisan political provocation by the Executive Branch of our government,” he wrote. “Protecting all athletes from such collusive conduct is what compelled Kaepernick to file his grievance.”

The filing was first reported by Bleacher Report’s NFL columnist Mike Freeman, who posted on Twitter that “I am told that @Kaepernick7 has filed a grievance under the CBA for collusion against the owners.”

Kaepernick’s supporters have said that the former Super Bowl quarterback who opted out of his contract with the 49ers before the season began, only remains unemployed because of blackballing over his starting the National Anthem protests.

For instance, while film director Spike Lee has compared Kaepernick’s not being signed status to the historic case of Jackie Robinson and then Major League Baseball’s refusal to sign-up a Black player, other prominent sport reporters reject the assertion.

They assert Colin Kaepernick’s current unsigned status to a deterioration of his skills over the years and that a marginal player like him isn’t worth such a distraction as he creates without any need for “collusion” to explain why he remains unsigned.

Others in the sports world are fighting back, pointing out how the entire is Kaepernick case has been factually misrepresented with former football star turned commentator Boomer Esiason highlighting the player’s ability and contract demands as to why he remains out of the league.

Appearing on Toucher & Rich Monday morning, Esiason had a lot to say, “I’m sorry. It doesn’t work that way.  You’re either prepared to play and when you go in and you get an opportunity, you make the most of it,” he said of Colin Kaepernick.

“Remember, he’s the one that walked away from the San Francisco 49ers.  He’s the one that said, ‘Hey, I’ll go and walk away from my contract and the amount of money you’re going to pay me.’  At the end of the day, other teams decided to interview and didn’t want him,” indicated Esiason.

“He could be fighting for social justice and be the greatest human being in the world.  At the end of the day, football teams want players who want to play football and who are good at it, and I don’t believe he’s either one.”