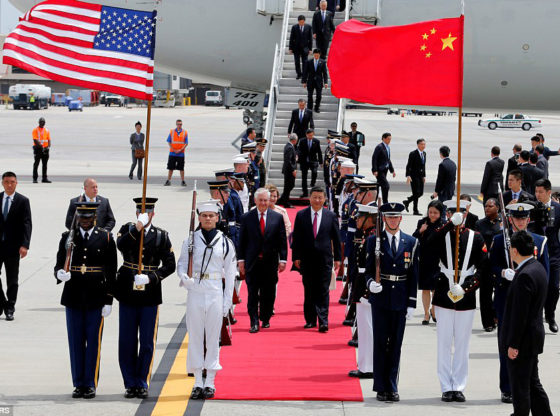 President Trump and First Lady Melanie Trump are hosting Chinese President Xi Jinping and his wife at his luxurious Mar-a-lago resort in Palm Beach, Florida.  The two leaders accompanied by their wives and diplomats spent the 2 days at the resort without the now popular Trumpian-style Golf Diplomacy.

The two leaders are expected to talk trade and foreign policy, with North Korea at the top of the agenda.  China’s role or lack thereof regarding North Korea’s behaviour remains a contentious issue, a topic which observers believe will be brought up.

Also expected to be discussed are issues of trade imbalance and currency manipulation which Mr. Trump has been a vocal critic of for decades.  Although the President has in the past gone as far as accusing China of “raping” America, both leaders want a respectful and healthy relationship from each other’s countries.

The meeting occurred just a few days after President Trump signed an Executive Order targeting Chinese products and accusing China for taking advantage of the existing imbalance in trade.

While the summit has been overshadowed by the military airstrikes in Syria, the two leaders hope to accomplish progress in the 2 days of talks.  Presidents Trump and Xi Jinping were having dinner when the airstrikes against Syrian were launched.

Despite protests by the Vietnamese community over Chinese policy in the region, the 2 day visit seems to have gone well for both leaders.  With the world and their own people watching, there is a lot to discuss other that a fancy dinner and friendship by these two economic rivals.