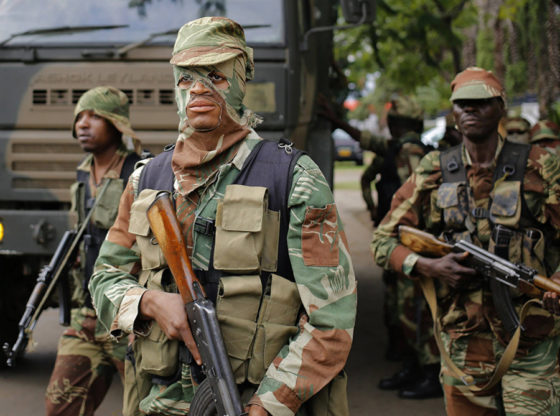 In a telling scenario of what to expect in a post-Mugabe Zimbabwe under the imposed Mnangagwa-Chiwenga military dictatorship, the Zimbabwe Defense Forces (ZDF) through its spokesperson announced on Monday that it will from now on, be conducting daily policing duties to “maintain law and order” now that the country has “returned to normalcy.”

In not so many words, he encouraged people to accept the new policing system warning everyone to “respect the laws” that will be the are norm under military rule.

Rather than return to the barracks after the Mnangagwa-Chiwenga coup, the military has remained on the streets patrolling and will not have an expanded mandate which is yet to be revealed, it ever.

This announcement that the army will not be engaging daily duties comes just days after the country’s highest court paved the way for a military dictatorship to consolidate its powers after it legitimized the coup in its ruling on Friday, the same day Emmerson Mnangagwa was sworn in.

The judgement that has been criticized by Human Rights advocates, opposition parties and Zimbabweans across the board that legitimizing the military coup has set a dangerous precedent and the military feels emboldened to do anything without challenge after Friday’s High Court ruling.

Although the bizarre joint presser was devoid of details on what the military’s defined role and duties in daily policing will be, optics is everything.  Releasing a joint ZDF-ZRP Statement is  intended to portray a united front as collaborating equals when in reality, everyone knows that it is General Chiwenga and his men that are in charge and in full control.

The ZRP has been reduced to playing a supporting role.

The animosity and mistrust between these two security sectors is causing apprehension and has people on edge raising fears of a counter-coup against the Mnangagwa-Chiwenga cabal.

Tensions between the Police and military escalated during the coup when they were told to stand down explaining their lack of presence on the streets of Zimbabwe.  Also, tensions manifested themselves during Mnangagwa’s inauguration when Police Commissioner Augustine Chihuri was booed during a speech affirming his loyalty to the man.

The military is keeping a watchful eye on the Police and is currently in control of all the security in Zimbabwe including policing. It’s only a matter of time before the tension between these two security sectors erupts into something bigger.