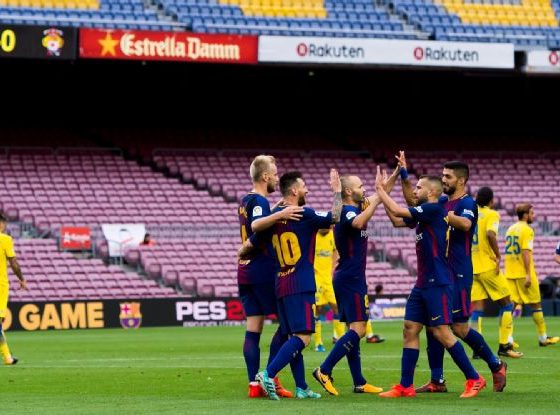 Barcelona’s La Liga game against Las Palmas went ahead but was played behind closed doors after there were calls for it to be suspended because of the political climate in Catalonia on Sunday.

There was tension across Catalonia throughout the morning as Spanish police attempted to shut down various polling stations as the region held a referendum, which had been deemed illegal by the Spanish government, on its independence.

That led to calls for Barca to postpone their game with Las Palmas, which ended in a 3-0 home win, because of fears that there would not be adequate policing for the match. The club announced shortly before kickoff that the match would take place but with no fans in attendance.

Sources have told ESPN FC that Barca vice-president Carles Vilarrubi will resign because of how the case was handled by the club.

There had been statements from people associated with the club, such as Barcelona’s former presidential candidate Agusti Benedito, telling team president Josep Maria Bartomeu that the game could not go ahead in the current political climate.

Bartomeu said that Barca made the decision to play the game behind closed doors so that “the whole world can see the situation in Catalonia.”

“It’s the lack of freedom of expression which worries us, it upsets us a lot,” he told beIN SPORTS. “But, in place of calling the game off, we’ve decided to play it in an exceptional manner: without fans. And we want to give our support to everyone.

“The security was guaranteed. The local police had confirmed that. We tried to call the game off with La Liga, but when they said no we decided to play without supporters so that the whole world can see the situation in Catalonia and how we are suffering.”

Various reports throughout the day claimed that the game had been called off, but as kickoff drew closer there was uncertainty as to whether the game would take place.

The reports suggested that both La Liga and the Royal Spanish Football Federation refused to call the game off, which left Barca facing a potential points punishment if they decided to suspend it on their own.

The Catalan club would have faced a potential three-point deduction as well as forfeiting the game.

Las Palmas arrived at the Camp Nou and maintained that the game would take place.

Barca sporting director Robert Fernandez, meanwhile, was unable to say whether the game would be played when he arrived at the stadium an hour before the 4:15 p.m. CEST kickoff.

Meanwhile, supporters were held at the Camp Nou gates, which were not opened on schedule.

Barcelona supporters group Grada d’animacio demanded that the game be suspended and threatened that they would storm the pitch in the event that it was not.

Preparation for the game went on as planned, though, with the media allowed in, Las Palmas announcing their lineup and Barca goalkeepers Jasper Cillessen and Marc-Andre ter Stegen coming out to warm up.