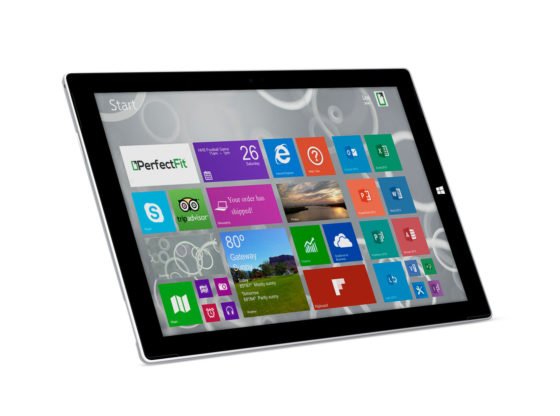 Microsoft Corp slightly missed Wall Street’s average revenue estimate for the latest quarter on Thursday, as sales of its Surface tablets and laptops slumped in the face of revamped competition in the personal computer market.

Shares of the world’s largest software company fell 0.6 percent to $67.85 in trading after the bell.

Under Chief Executive Satya Nadella, who took the helm in 2014, Microsoft has sharpened its focus on the fast-growing cloud computing unit to counter a prolonged slowdown in the PC market, which has weighed on demand for its Windows software.

That transition remained on track, with cloud margins improving and the company’s annual commercial cloud revenue run rate – a bespoke metric closely watched by analysts – reaching $15.2 billion, a 50 percent year-on-year improvement. It marks good progress toward its goal of pushing the figure to $20 billion by 2020.

Revenue from Microsoft’s personal computing unit, its largest by revenue, fell 7.4 percent to $8.84 billion. Analysts on average had expected revenue of $9.22 billion, according to research firm FactSet StreetAccount.

Surface revenue plunged 26 percent to $831 million, down from $1.3 billion in the year-ago quarter.

Popular high-end computers from other makers, along with the fact that many Surface products have been on the market for many months, hurt Surface sales, said Zack Moxcey, an investor relations director for Microsoft.

The lower-than-expected revenue in the personal computing division came amid an uptick in the broader PC market.

Revenue from the unit that Microsoft calls “Intelligent Cloud,” which includes server products and the company’s flagship cloud computing platform, Azure, jumped about 11 percent to $6.76 billion in the quarter.

Microsoft’s commercial cloud gross profit margin reached 51 percent, up from 48 percent the previous quarter. Microsoft has been emphasizing higher-margin premium products such as databases and recently started building its own servers rather than relying on Hewlett Packard Enterprise Co , driving the cloud margins higher, analysts said.

Microsoft also, for the first time, reported a revenue growth rate for Dynamics 365, its competitor to Salesforce.com Inc’s online sales software. Revenue grew 82 percent in constant currency, though the firm did not give an absolute dollar total.

“They are focused on taking the user data on LinkedIn and integrating it in a way that it conforms to privacy concerns and user concerns and makes their (sales software) systems highly competitive to what Salesforce offers,” said Shannon Cross, an analyst with Cross Research.

Microsoft said LinkedIn, which it bought for about $26 billion, contributed $975 million in revenue in the quarter, $25 million more than analysts had expected.

Microsoft’s shares had risen 9.9 percent this year through Thursday, eclipsing the 7 percent gain in the broader S&P 500.