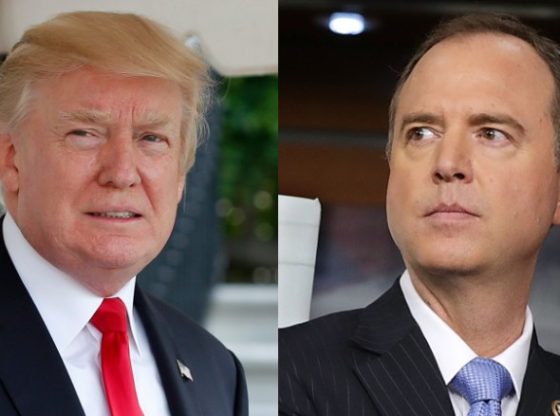 “Shifty Schiff!” The label and moniker currently being used by President Donald Trump to brand the unpopular Democrat Congressman Adam Schiff. This name has become synonymous with the infamous lawmaker from California and it is courtesy of Trump, or, is it?

His brilliant use of the moniker has brought the otherwise previously less-known term to the national spotlight as well as global prominence, and so far, he is being credited for it.

Let’s be honest.  Currently, there is no other person in the political world, be it the U.S. or outside, who is as brilliant a master brander and very effective at employing it like Trump. He is undoubtedly a genius at labeling his critics and political opponents with such brutal effectiveness that one rarely recovers from it.

Once Trump brands you, that label sticks with you and to you like unwanted gum under the dirty sole of your shoe.  It will linger, hover over you and follow you like the unbearable foul stench in the alley passageway that one cannot escape.

With that said, very rarely has anyone come forward, not to take the thunder away from President Trump per se, but to claim credit for either a term, label or phrase that he may have used or is using to great effectiveness.  This case may as well be an exception and probably the first time that anyone has ever done so.

The truth is, I could not keep quiet any longer. Each time I hear someone use the term “Shifty Schiff”, I feel a gut punch in my stomach.  So great is the punch that it makes me want to scream, Shifty Schiff is mine!  I coined the term.”

With the gut-punch feeling unable to recede or ebb away, the only remedy and available recourse was to let out the loudest of screams in the hopes of regaining at least some semblance of sanity, hence this piece.

Also, I wanted to set the record straight that although as good a master brander as President Trump is and reputed to be, he did not coin this particular term that aptly captures the man that many Americans and certainly followers of U.S. politics across the globe view Adam Schiff.  As a Canadian who came up with this term, that in itself should say a lot about the slimy shiftiness of Shifty Schiff.

Here is the fact.  The term Shifty Schiff  is mine.  I coined it in 2017 and I claim full credit for it.  Because of the current political environment and the shifting, fast-changing nature of the political narrative, I had to come out and say something before it loses its relevance particularly within the context of this political quicksand of impeachment that the Shifty One has successfully dragged his party into.

Furthermore, this label is more relevant today with the ongoing impeachment proceedings and the fundamental role of the Shifty One. Anyone who has followed this entire process, it makes it much easier to understand its symbolism and the man associated with it. One needs not revisit the beginning of the Trump Presidency to further understand how the term Shifty Schiff fits within the current political context of American politics.

Why Come Out Now

When Fox News host Sean Hannity started using the term Shifty Schiff during his nightly primetime show sometime in September/October of this year and was quickly picked up by President Trump thereafter, it was then that I made the decision to come out.  That was about 3 months ago.

Coming forward was not really a problem; making the decision to do so, was. While fully cognisant of the level of scrutiny that would soon follow, the major  concern had more to do with proving the  claim. Another challenge however, was finding a platform that was willing to carry the piece.  The latter, I can say this now, was the most inhibitor than a challenge.

While I may still remember very well when, why and how I came about the term, the social media account associated with it, is no longer active.  It was deactivated barely weeks prior to September/October, the same period the term made its way into mainstream media before finally being catapulted into the national spotlight and then global prominence largely due to its effective deployment by President Trump, whom I greatly credit.

In a span of less than a month from the time Hannity used Shifty Schiff to Trump picking it up, a whole slew of other people among them hosts, guests, contributors and pundits of the same network had adopted and started using the term.  As the saying goes, the rest is history.

Herein lies the challenge. The Twitter account @s_queennie where the term and hashtag ‘Shifty Schiff’ was coined and first used, had already been deactivated by that time when Hannity adopted it.  The reason why I deactivated that account is that it had all but been rendered redundant by Twitter for nearly a year since the primary election season in 2018.

The initial statement and original Tweet would have proven exactly when the term was first used and in what context it was created for one to better understand and appreciate its meaning. Nonetheless and that notwithstanding, it was on Twitter in 2017 that the term Shifty Schiff was first coined.

It had barely been a few months into the Trump Presidency back in 2017 that I first used the term Shifty Schiff on Twitter. Russiagate had just begun in addition to  what had seemed, even then, as an endless laundry list of evolving accusations of criminality against President Trump, his family and administration.

It was also the same time that the less-known Adam Schiff was becoming an unavoidable prominent feature in our homes and living rooms, albeit an unwelcome one. His numerous appearances that flooded our screens on various major television networks made it rather impossible to avoid seeing the Shifty One.

Furthermore, it wasn’t just his endless craving for the spotlight that drew my attention.  Rather, it was the often outrageously outlandish claims and frankly, his unusually preposterous shifting narratives and awkward body language among other things that conjured up the term.

To say that the Democrat Congressman from California was an unlikeable character to anyone who watched him even back then, would be an understatement.

It was after watching him repeat the same preposterous, outlandish claims that had become signature hallmarks of his interviews that the first words out of my mouth were, “This guy is shifty as hell! Everything about him is so shifty.”

Quickly, I took to Twitter and live-twitted those exact words with the following hashtags at the end of the 140-word statement: #ShiftySchiff #SchiftySchiff #ShiftyAdamSchiff #WhatACharacter!

Because I was such a political junkie, an avid tweeter and Twitter addict at the time, I always made sure that whenever I watched television, there were two items beside me: my Blackberry phone and a laptop.

Immediately,  like most of my other tweets at the time, it instantly became a hit.  It was liked and retweeted numerous times. I continued from that moment on to use the term ‘Shifty Schiff’ whenever I twitted something about Adam Schiff and so did many others within the small, Twitterverse community that had developed due to the shared topical views.

I knew even back then that it was only a matter of time before any one of the many anchors, hosts, pundits and journalists whom I followed, would eventually pick up the term somehow and use it.   Finally, after 2 years of circulating on social media, it got to Sean Hannity somehow and later picked up by President Trump. For that, I am indeed grateful for it is where it is today because of that bully pulpit.

Unfortunately, with the 2018 midterm election, came a new stricter reinforcement of censoring on Twitter.

Almost overnight, my account was rendered redundant through what I have since come to understand as ‘shadow banning’.  At the time, I neither had knowledge nor understanding of why my account had suddenly seemed to have just stopped functioning.

It was as though nobody could see or view my tweets and neither could they be liked or retweeted.  I stopped getting new followers and equally, I lost a significant number of old ones without any explanation. The small Twitterverse community I had come to know and appreciate, it, too, mysteriously disappeared as I couldn’t see them or their tweets and accounts.  It was as if I was locked out or lost somewhere on Twitter island.

At the same time, fake replica accounts with the same user name as mine started popping up. For the first time in all the years I had been on Twitter, I felt blind and shutout.  It wasn’t until after the primary election that I first learnt of the term, “shadow-banning” during an interview on one of the networks where an individual basically described everything that I had been experiencing at the time.

It wasn’t until about three months ago and nearly after a year of inactivity that I decided to deactivate my Twitter account.  Unfortunately, little did I know that a few days later, Sean Hannity and then President Trump would adopt, use and then popularize the term which I had coined just two years earlier.

Coming forward to claim the term as my creation does not it any way minimize the effectiveness by which President Trump has deployed and utilized it through his mega platform and bully pulpit at his disposal. However, what it does, is shine a light that there are countless small people like me out there whose creativity be it in the form of words, terms, phrases and statements that often end up in the mainstream through other means or people, are never known or recognized let alone acknowledged.

Small People Are Creators Too

Everyone deserves their work and creation acknowledged no matter how miniscule. It’s all about recognition and acknowledgement of countless nameless others out there whose work and creations go unnoticed and unrecognized as the credit of their work and effort goes to another.  Lest one may wonder, words are indeed a creation as there is hard work and mental gymnastics involved for one to come up and end up with a perfect term, phrase or statement.

Lest we forget, behind every major word, term, phrase or statement is a person who coined and created it.  Some, if not many of these people are neither known nor acknowledged.   Furthermore, the countless, “small” and less-known people neither have a voice nor platform to tell their story and claim their work or contribution just as I did.

The best that some of these people can do is to tell others about it or at best, complain about it to someone else, like I did at first.  That way and as insignificant at it may seem, it does give the individual a little bit of power to lay claim on what they believe is theirs,  no matter how small and insignificant that act may be.

For the lucky few with access to a platform,  they can write about it and let the world know as I have done.   Finally, coming out and claiming your creation does not and should not in any way stop anyone from using it unless  otherwise stated.  Neither should it diminish all the progress that may have already been accomplishment thus far.