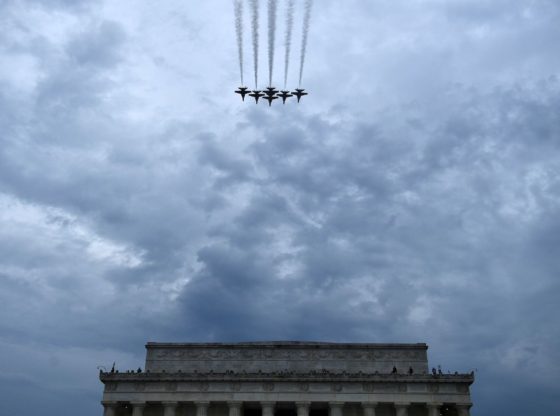 In what had already been widely criticized and condemned as a page-by-page playbook of Stalin’s Russia, China’s Tiananmen Square and North Korea dictatorship before the “Salute To America” Independence Day event took place, President Trump successfully sucked the wind out of the naysayers when he did the opposite of what had been both predicted and anticipated .

Instead, what had been sold to the American public as a would-be full-fledged Soviet-style military parade with all the pomp and circumstance, a military armada, turned out to be an event that was family friendly and apolitical. As a result of its success, it was embraced and appreciated by many Americans who fell in love with the concept.

The flyovers started before President Trump took the stage.  As soon as he and the First Lady arrived, a VC-25 Boeing jet which is Air Force One, flew over the National Mall in time to get his attention as he made his way to the stage.

President Trump gave a shoutout to each of the five branches of the Defense Forces beginning with the U.S. Coast Guard, the U.S. Navy, the U.S. Air Force, the U.S. Marines and the U.S. Army. He ended with the “very soon” to be “Space Force” which he has been touting since assuming office.

It was then that the flyovers began.

After that were the U.S. Marine’s two V-22 Osprey tilt-rotor aircraft from Quantico, Virginia joined by the soon-to-be new Marine One Presidential helicopter, the Sikorsky VH-92.

Next to do a flyover was the U.S. Army’s four AH-64 Apache attack helicopters.  They  flew over the National Mall towards the Lincoln Memorial as President Trump’s narration reverberated in the air, “In war there is no substitute for victory” and “They are the greatest soldiers on earth,” as the crowds screamed.

The grand finale of the flyover was the Navy’s iconic Blue Angels.  The six F/A 18 Hornets demonstration squadron which flew past the National Monument, over Reflecting Pool and the Lincoln Memorial wrapped up the show in high spirits.