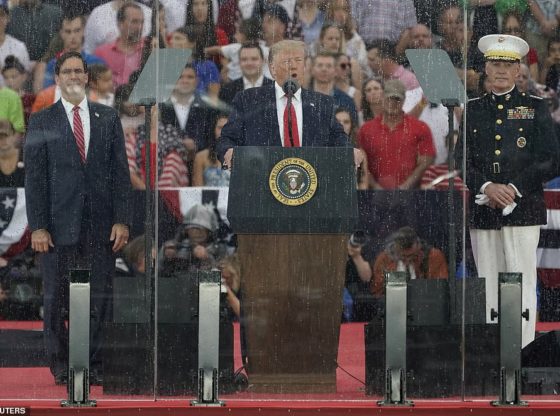 President Trump arrived at the “Salute To America” celebration event commemorating the nation’s Fourth of July Independence Day to great fanfare and huge applause despite a slight programming delay due to heavy rainfall.

Reading from a speech whose excerpts had been revealed earlier in the day by the White House, the nearly 50-minute long speech was more inspirational but patriotic, resounding and very relevant to the occasion being celebrated.

After criticism from almost every corner of political and media cycles that he was politicizing the annual national event with fears that his address would resemble that of his rallies, President Trump may have shocked and disappointed some skeptics.  He remained  disciplined in his messaging as he delivered a strong and very  patriotic, pro-American speech that spoke highly of the country’s history and celebrated its innovative nature.

Not only did the speech focus the strength of this nation, it also highlighted the greatness of America from its pre-independence past to the present.

The Fourth of July National Independence Day celebration was attended by thousands of people from all corners of the country who braved heavy rains throughout the afternoon to wait for additional more hours to see the star of the “Salute To America” event, President Trump.  When finally made it, he surely did not disappoint.

“Hello America, Hello!” after a reverberating “USA! USA! USA!” welcoming him and the First Lady.

“The First Lady and I wish each and everyone of you a Happy Independence Day on this truly historic Fourth of July” to loud cheers and applauses.

Aware that almost every eye in the nation and across the world was certainly upon him, not least forgetting that he was also breaking precedent by being the first U.S. President in 70 years to deliver an Independence Day speech and at the Washington Mall, President Trump did not disappoint.

“Today we come together as one nation with this very special Salute to America,” he said to loud cheers and applause.

“Our nation is stronger today than it ever was before,” indicating that its future rested “on the shoulders of men and women willing to defend it.”

President Trump also took time to give a shout out to different sections of the U.S. Defense Forces namely the U.S. Army, U.S. Navy, U.S. Air Force, the U.S. Coast Guard, the U.S. Marines and the “very soon” to be “Space Force” which has been his focus of establishing ever since he came into office.

In a busy day that started with parades and was not dampened by the heavy rainfall, the excitement was palpable as Trump delivered his nearly 50-minute patriotic speech with no interruptions.

The only brief intermissions in the speech were to allow military jets flyovers which were scripted within the speech itself.

It was then that the B-2 stealth bomber,  Blue Angels and Coast Guard choppers did spectacular flyovers during each interval introducing its group while Air Force One flew overhead earlier as President Trump and First Lady Melania Trump made their way to the makeshift stage.

It was interesting to watch the flyovers while the  U.S. military band played the marching songs for the Navy, the Air Force the and U.S. Army, each representing each category as it flew over.

“As long as we stay true to our cause, as long as we remember our great history and as long as we never stop fighting for a better future, then there will be nothing that America cannot do,” he reminded the audience.

President Trump citied a list of accomplishments by the U.S. military going back to the nation’s history, from pre-independence to its role in 20th century wars to recent.

In a speech that stayed clear of politics, he touted the military’s strength and praised each branch while reciting various accomplishments.  He offered a brief history, cited the achievements by the U.S. armed forces, the innovation, successes in space and the role within the civil rights movement.

He went on to highlight the country’s accomplishments through the years, including the invention of the light bulb by Thomas Edison, landing on the moon and successes in the arts and automobile industries. Trump also celebrated both the civil rights and the suffrage movements, urging young people to “join our military and make a great statement in life.”

He then reminded the crowds of the true “American spirit” how it “built this country into the most exceptional nation in history,” while emphasizing its strength.

“That same American spirit that emboldened our founders has kept us strong throughout our history.  To this date that spirit runs through the veins of every American patriot. It lives on in each and every one of you.”

“We celebrate our history, our people, and the heroes who proudly defend our flag – the brave men and women of the United States military,” he told an enthusiastic crowd most of whom were adorned in patriotic colours of red, white and blue.

During the speech, President Trump also vowed to “plant the American flag on Mars.”

After paying tribute to NASA’s great achievements, Trump told the crowd that he wanted the U.S. to be “back on the moon very soon,” where he hoped that they “someday…plant the American flag on Mars.”

Despite the weather which did not dampen the spirit, thousands who attended the “Salute To America” celebration included Trump and non-Trump supporters from all over the country as well as tourists.

“As long as we stay true to our purpose … as long as we never ever stop fighting for a better future, there will be nothing that America cannot do.

“The future belongs to the brave, the strong, the proud and the free. We all share the same heroes, the same home, the same heart, and we are all made by the same Almighty God,” a statement which tugged at the heartstrings of Christians and religious Americans who are the core voting base.

‘Today just as it did 243 years ago, the future of American Freedom rests on the shoulders of the men and women willing to defend it,’ he added.

Known for his staunch support for the military and Law Enforcement agencies, he asked the audience to remember Law Enforcement officials and also thanked Gold Star families for their sacrifices.

“Our nation has always honored the heroes who serve our communities. The Firefighters, First Responders, Police, Sheriffs, ICE, Border Patrol and all of the brave men and women of Law Enforcement.

“On this July 4th, we pay special tribute to the military service members who laid down their lives for our nation,” he added.

“To young Americans across our country, now is your chance to join our military and make a truly great statement in life,” said the Trump.

The speech which marked the 243rdanniversary of the Fourth of July, the Founding Fathers’ Declaration of Independence, ended with the military band playing the rendition of “Battle Hymn of The Republic.”