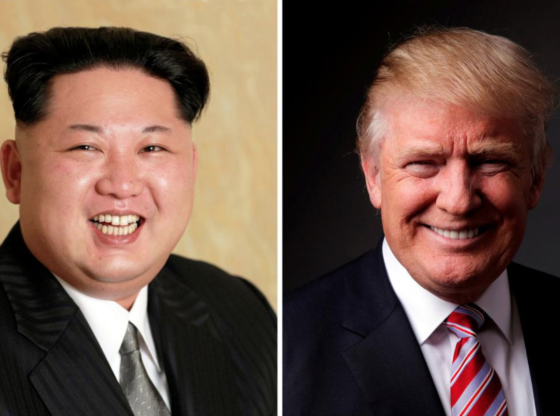 In a diplomatic breakthrough of a historic proportion, and a historic moment, President Trump made history by accepting Kim Jong Un’s invitation to meet in person by May, to discuss North Korea’s nuclear program and possibly permanent denuclearization.

The special announcement was made by a South Korean National Security Officer Director, Chung Eui-yong on Thursday evening after delivering the message and invitation from the unpredictable dictator in person to President Trump at the White House.

.@POTUS greatly appreciates the nice words of the S. Korean delegation & Pres Moon. He will accept the invitation to meet w/ Kim Jong Un at a place & time to be determined. We look forward to the denuclearization of NK. In the meantime all sanctions & maximum pressure must remain

The face-to-face meeting between a U.S. President and a North Korean dictator will be the first U.S-North Korea Summit in almost 30 years, marking a dramatic breakthrough in nuclear tensions with Pyongyang, assuming it goes through.

The meeting’s date and location  are yet to be determined.

“President Trump greatly appreciates the nice words of the South Korean delegation and President Moon. He will accept the invitation to meet with Kim Jong Un at a place and time to be determined.  We look forward to the denuclearization of North Korea. In the meantime, all sanctions and maximum pressure must remain.”

Speaking to reporters on Thursday evening, just steps from the West Wing at the White House, South Korea’s National Security Director credited Pyongyang’s sudden change in diplomatic overtures to President Trump’s negotiating style and for being a “Deal Maker.”

The North Korean dictator Kim made the overture directly (through Chung) to President Trump who has had no qualms demeaning the North Korean leader by calling him “Little Rocket Man”.

“He conveyed that he wants to meet with President Trump as quickly as possible,” said the South Korean envoy.

Chung also said Kim Jong Un is “committed to denuclearization” and to suspending nuclear and missile tests, citing a meeting they had with the dictator earlier this week.

“A meeting is being planned,” Trump posted on Twitter after speaking to Chung, who said Trump expressed a willingness to sit down with Kim in what would be his biggest foreign policy gamble since taking office in January 2017.

Chung said President Trump had agreed to meet Kim Jong Un by May in response to the dictator’s invitation. A senior U.S. official later said this is something which could happen “in a matter of a couple of months, with the exact timing and place still to be determined.”

Asian stock markets responded positively to the news, with Japan’s Nikkei climbing 2.3%, South Korean stocks up 1.8% while the U.S. dollar rose against the Japanese yen.

Kim Jong Un talked about denuclearization with the South Korean Representatives, not just a freeze. Also, no missile testing by North Korea during this period of time. Great progress being made but sanctions will remain until an agreement is reached. Meeting being planned!

President Trump has in the past, indicated that he was willing to meet Kim Jong Un under the right circumstances but had indicated at that time, it wasn’t the right time for such talks.

“Kim Jong Un talked about denuclearization with the South Korean Representatives, not just a freeze,” Trump said on Twitter on Thursday night. “Also, no missile testing by North Korea during this period of time. Great progress being made but sanctions will remain until an agreement is reached.”

A meeting between Kim Jong Un and President Trump would be a major turnaround after a year in which North Korea has carried out a battery of tests aimed at developing a nuclear-tipped missile capable of hitting the U.S. mainland.

According to Chung, the North Koreans are offering to suspend their nuclear missile testing program, an issue that the President’s advisors are both cautious and skeptical about.

“At this point, we’re not even talking about negotiations,” said one senior official on holding North Korea to its word on freezing its illicit nuclear and ballistic missile development programs.

Trump’s aides have been wary of North Korea’s diplomatic overtures because of its history of reneging on international commitments.  It was also a failure of efforts on disarmament by previous U.S administrations of Bill Clinton, George W. Bush and Barack Obama.

South Koreans responded positively to the news, with online comments congratulating President Moon Jae-In for laying the groundwork for the Trump-Kim talks although skepticism over previous failed talks remained.

The North and the South Koreas are technically still at war even though their 1950-53 conflict ended in a ceasefire, not a truce.

A senior administration official told Reuters that President Trump had agreed to the meeting because it “made sense to accept an invitation to meet with the one person who can actually make decisions instead of repeating the sort of long slog of the past”.

The South Korean envoy credited the diplomatic breakthrough to the President and his politics, saying “President Trump has made his reputation on making deals.”

“A word of warning to North Korean President Kim Jong Un – the worst possible thing you can do is meet with President Trump in person and try to play him,” Graham said on Twitter. “If you do that, it will be the end of you – and your regime,” read the statement.

In what would be a key North Korean concession, the South Korean envoy said Kim Jong Un understood that “routine” joint military exercises between South Korea and the United States will not cease but continue despite the agreement for the upcoming meeting.

Pyongyang had previously demanded that such joint drills be suspended in order for any U.S. talks to go forward.

Tensions over North Korea rose to their highest in years in 2017 as President Trump increase pressure by warning that all options are on the table, including military ones, in dealing with Pyongyang, a stance which others could credit to the sudden change in diplomatic overture by the regime in Pyongyang.

Whether it’s a result of biting sanctions and the threat of a military actions, signs of a thaw emerged early this year, with North and South Korea resuming talks leading to the North attending the Winter Olympics in Seoul.

During the Pyongyang talks this week, the two Koreas agreed on a summit in late April, their first since 2007.

While Japan remained cautious, China called on the United States and North Korea to hold talks as soon as possible, warning at a news briefing in Beijing on Thursday that things “will not be smooth sailing”.

My statement on North Korea. pic.twitter.com/tOpa3ewrtl

Both Japan and China are suspected of not wishing to see a peaceful resolution to the North Korean situation as the prospect of a denuclearized North whose desire is reunification with the South could threaten the balance of power in the region, something the two regional powers would rather not see happen.

South Korea’s Moon has said sanctions should not be eased for the sake of talks and nothing less than denuclearization of North Korea should be the final goal for talks.