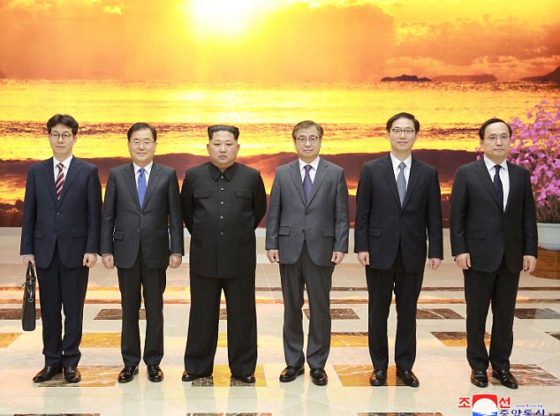 Responding to questions during Friday’s White House Press briefing, Sanders said, “The president will not have the meeting without seeing concrete steps and concrete actions take place by North Korea, so the President will actually be getting something,”

In an unprecedented diplomatic gamble that shook the world, President Trump said he would be meeting with North Korean dictator, Kim Jong Un sometime in May, an announcement that took the U.S. lawmakers, global allies and the entire country by surprise.

The United States has long waited for any talks with Pyongyang to in a bid to get them to abandon its nuclear weapon and missile programs.

Hopes for a breakthrough with North Korea rose on Thursday when Trump said he was prepared to hold an unprecedented meeting with Kim.

The two leaders prompted jitters around the world last year as they exchanged bellicose insults over the North’s attempts to develop a nuclear weapon capable of hitting the United States. Pyongyang has been criticized for pursuing a nuclear program in defiance to international norms and the U.N. Security Council resolutions.

But tension eased around last month’s Winter Olympics in South Korea, laying the groundwork for what would be the first meeting between leaders from North Korea and the United States, and the biggest foreign policy gamble for Trump since he took office in January last year.

Speaking in Washington on Thursday after briefing the President about a meeting South Korean officials held with Kim Jong Un this week, South Korea’s National Security chief, Chung Eui-yong said Trump had agreed to meet the North Korean leader by May in response to his invitation.

According to the South Korean envoy and negotiator, Kim Jong Un had “committed to denuclearization” as well as to suspending the country’s nuclear and missile tests.

While there may be skepticism among some foreign relations wonks, others see a likely prospect for diplomatic solution with President through Trump’s huge gamble that may give the rogue nation the possible way out to finally abandon its destructive nuclear and missile program.