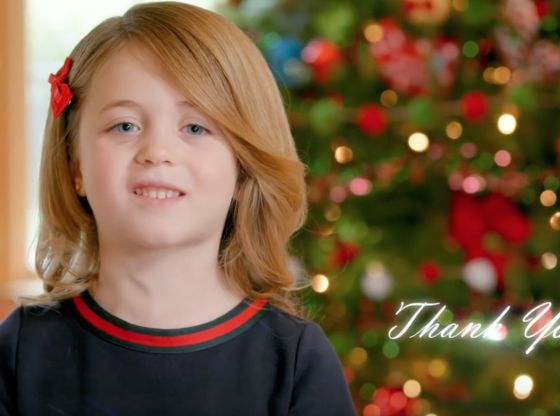 An America First Christmas ad featuring ordinary Americans thanking President Trump for his many accomplishments and ending with a young girl saying, “Thank you President Trump” has gone viral.  The $1 million ad which debuted on Fox News on Wednesday will start airing on other channels on Christmas Day.

The commercial by America First – a nonprofit pro-Trump Super Pac – was featured following President Trump’s first major legislative victory on a historic Tax Cuts And Jobs Act.  The “Thank You” ad’s media blitz which is due to begin this Christmas Day touts Trump’s successes while the decision to air it on December 25th is itself symbolic in nature.

The symbolism of airing the ad on Christmas is huge. It is a declaration of victory on what had become known as the “War on Christmas” and in large part on Christianity in American society by mainly liberals with support from their Democrats legislators.

The war on Christmas and everything it stood for intensified under the Obama-era which saw an advancement to use the words”Happy Holidays” instead of the traditional “Merry Christmas” because it was deemed “less offensive” in the intolerant environment that had foisted during his presidency.

Before becoming President, then candidate Donald Trump campaigned on bringing back the spirit of Christmas including the promise that everyone would once again be able to say “Merry Christmas” in public without fear of intimidation, threats or being labelled something else.  That promise has been fulfilled.

Many Americans now feel free to once again say “Merry Christmas” to each other without fear and in public. Everywhere, there is joy in the air as people cheer and are celebrating Christmas openly for the first time in a long time.

Because of President Trump’s insistence on using the words “Merry Christmas” and continuously affirming that America is a Christian nation, Christmas trees and cheers are now seen everywhere accompanied by Christmas songs which can be heard in shops, malls and businesses.

The festive mood and open display of joy was, at this time last year, almost unseen due  to fear of “offending others” as well as threats to any business that engaged in public displays of Christmas or what later became labelled as “religious displays” in a bid to shut down the celebration of Christmas.

This year, however, everything has changed as featured in this ad.

The ad features an array of regular “everyday Americans” who are “standing up to thank President Trump for Making America Great Again.” They are thanking him for “cutting taxes,” for “fixing our economy,” for “keeping my family safe,” for “putting America First,” for “supporting Israel” and for “reminding us to stand for our National Anthem.”

The powerful 33 second ad then ends with a young girl ready for Christmas and standing in front of a beautifully decorated Christmas saying, “Thank you President Trump for letting us say, ‘Merry Christmas’ again.”

Here’s to wishing all our loyal readership and followers a Merry Christmas and a Happy New Year.