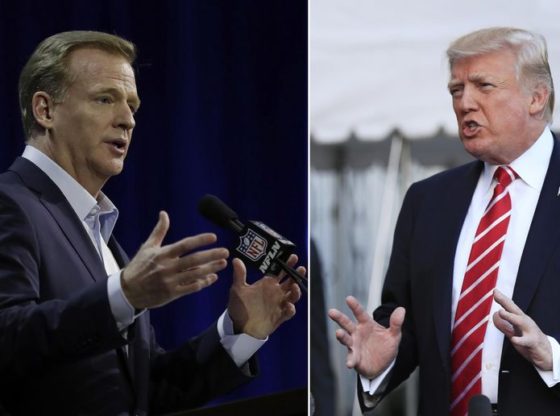 President Trump escalated his battle with pro football players protesting the National Anthem by urging the government on Tuesday to end the use of tax-exempt municipal bonds to build or renovate NFL stadiums.

Hours later, the National Football League (NFL) seemed to take note and acquiesced with Commissioner Roger Goodell releasing a letter saying the league’s position on the National Anthem is that “everyone should stand.”

In the letter released to NFL team presidents on Tuesday afternoon, Mr. Goodell said the league needs to “move past this controversy.”

“Like many of our fans, we believe that everyone should stand for the National Anthem. It is an important moment in our game,” he wrote.

He said players looking for a platform for their messages could be accommodated some other way and that it would be discussed at a meeting later this month.

What this sudden change by Goodell and the NFL leadership may suggest is that they are feeling the impacts of the wrath of the fans through boycotts courtesy of the spotlight the President has shown on the issue.  The month-long ceaseless criticism by Trump on the unpatriotic act of protesting the National Anthem and the flag has him winning with the majority of the nation fully behind him.

After Sunday’s protest in Indianapolis by San Francisco 49ers players, a move which led to the Vice President and the Second Lady walking out of the game, President Trump once again put the spotlight on the NFL for its failure to act.

“Why is the NFL getting massive tax breaks while at the same time disrespecting our Anthem, Flag and Country? Change Tax Law!” tweeted the President on Tuesday morning.

White House Press Secretary Sarah Huckabee Sanders later clarified the President Trump’s on the President’ twitter statement saying that he was alluding to the “billions of taxpayer dollars” that have subsidized the construction of professional sports stadiums.

“If this industry is going to use money from American taxpayers to build the very fields they play on, is it really too much to ask that they show respect for the American Flag at the beginning of the game?” said Huckabee Sanders.

He also took aim at ESPN, saying the network — which airs “Monday Night Football” — is struggling for viewers while employing broadcasters who have defended the players’ ‘take-a-knee’ protests.

According to recent polls, President Trump’s war on the NFL is having an impact and the public is wholly aligned with him on this issue.  Most Americans are unhappy with the way players are protesting the National Anthem and they resent the fact that they are protesting the wrong message on the wrong platform at the wrong time when people seat down to watch sports not politics.

A Morning Consult survey late last month found views of the NFL among many Americans particularly Trump supports had decidedly turned negative and with the league’s favorability declining.

Meanwhile, a Yahoo Finance poll found that as many as 80 percent of respondents said they plan to watch less football on television. The same poll found that 53 percent are more supportive of the President since he lighted this issue and condemned the protests as being unpatriotic and disrespectful to the U.S. flag and the military.

This weekend’s slate of games gave Mr. Trump another chance to pounce. On Monday, he praised Dallas Cowboys owner Jerry Jones for saying he would bench players who he thought were “disrespecting the flag.”

He followed up Tuesday with his blast at ESPN and his threat of stadium taxes.

U.S. cities typically finance the repair or construction of stadiums through the sale of municipal bonds that are exempt from federal taxes. In total, federal taxpayers have helped underwrite some $13 billion in bonds for stadiums across all sports since 2000, according to a Brookings Institution study.

Brookings estimated that the Federal government has lost as much as $3.7 billion in tax revenue on the bonds, exceeding the $3.2 billion in savings they created for stadium owners.

President Obama sought to end the use of tax-exempt bonds to build stadiums in 2015, but Congress never considered his plan.

Analysts differ on whether the cities would try to fight any effort by the Trump administration to end the practice. The interaction of federal legislation with state and municipal powers could present legal headaches for the president.

“Public financing for sports facilities is a complicated topic in that it can involve spending, taxes and bonds and cut across different areas of law at municipal, state and federal levels,” he said. “Any potential changes related to Federal Laws should be viewed in this broader context.”

However, Andrew Zimbalist, who teaches sports economics at Smith College, said the cities might avoid battling the Trump Administration because they would be unlikely to gain traction among the public.

“The states would look stupid,” he said. “There are more important battles to fight, and they can just negotiate a better deal with the team.”

The NFL was a tax-exempt non-profit until 2015, when the league voluntarily ended that status under pressure from Capitol Hill. The break had been worth about $10 million a year, according to Citizens for Tax Justice.

The NFL was considered a nonprofit because it distributes profits evenly to all 32 teams. Each team is required to pay taxes on that distribution.