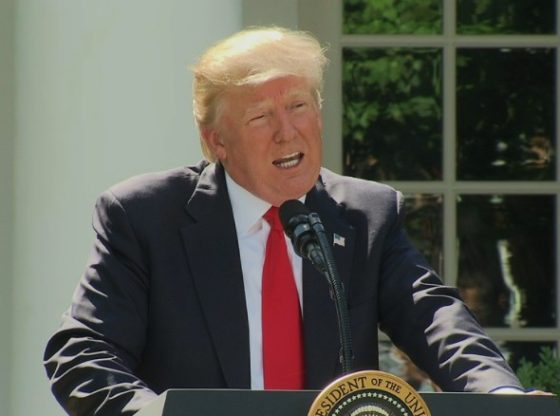 President Trump announced Thursday that he was starting the process for a U.S. exit from the Paris climate change agreement, but said he would try to renegotiate a better deal for the American people.

He said he was getting out of the deal, and immediately ending all compliance activity. He said it was a bad deal for the U.S. and standing in the way of his plans for economic and job growth.

“I don’t want anything to get in our way. I am fighting every day for the great people of this country,” Mr. Trump said in the Rose Garden.

He said he was keeping a campaign promise to quit the agreement and fulfilling his “solemn duty to protect America and her citizen.”

“I was elected to represent the citizens of Pittsburgh not Paris,” Mr. Trump said. “I promised I would exit or renegotiate any deal that doesn’t serve America’s interests.”

Mr. Trump said he was just getting started ripping up bad deals the U.S. had entered.

He can unilaterally pull out of the deal with nearly 200 nations because President Obama signed it without Senate ratification. As with scores of other executive actions by Mr. Obama, this too would be wiped out with a stroke of his successor’s pen.

Breaking off the Paris accord, however, likely was the most painful blow yet for Mr. Obama. It shattered the capstone of his climate change and foreign policy legacy.

“He’s putting our children and grandchildren at risk,” he said.

“This is great news for family budgets, which under the Obama Paris plan would have seen significant increases in costs for utilities and nearly everything powered by fossil fuels, which accounts for 82 percent of all the energy generated in the United States,” he said.

The announcement caps a months-long debate inside the administration over whether Mr. Trump should keep his campaign promise and scrap the agreement or heed moderate voices — such as Secretary of State Rex Tillerson, his daughter, Ivanka Trump, and son-in-law Jared Kushner — and remain in the deal.

He also was pressured by major U.S. corporations, including ExxonMobil and Conoco Phillis, to remain in the deal to preserve America’s role shaping global energy policy.

Tesla CEO Elon Musk, who has been a prominent advisor to the president, threaten to quit several White House councils if Mr. Trump went through with the pullout.

On the other side, White House adviser Stephen Bannon and EPA Administrator Scott Pruitt were among the biggest proponents of exiting Paris entirely. They publicly trashed the agreement and cast it as a potential economic disaster for the nation.

Republican lawmakers and governors, along with conservative think tanks, have echoed that position, putting non-stop pressure on the president over the past several weeks.

Leading Republicans on Capitol Hill praised Mr. Trump even before he spoke Thursday afternoon, saying that withdrawal from the deal will allow the U.S. to fully capitalize on its energy resources without the restrictions imposed by a global pact.

“By pulling out of the Paris Agreement, Trump is further demonstrating his prioritization of American energy dominance,” Sen. Jim Inhofe, Oklahoma Republican, wrote in an op-ed for USA Today on Thursday. “We must do everything in our power to advance the development of domestic energy to lead the world away from dependence on energy-rich regimes like Iran and Russia.”

The deal, the result of years of negotiation by the Obama administration, was finalized in December 2015. It calls on the U.S. to reduce its greenhouse gas emissions by at least 26 percent by 2025 — an ambitious goal that many specialists say would have been difficult to meet even if the Trump White House had fully backed the agreement.

The accord, which is non-binding and carries no consequences if nations don’t comply, was signed by virtually every country in the world, including China, the world’s top polluter. U.S. participation in the deal was crucial to getting China and other nations on board.

But critics have said the nature of China’s commitment only highlights why the deal is fundamentally unfair to the U.S. While America would be forced to begin harsh emissions reductions immediately, China agreed only to cap its pollution by 2030 and then begin reductions, effectively delaying the economic consequences that the U.S. would begin to feel immediately.

Chinese officials this week publicly reiterated their continued support for the deal, and the nation reportedly is far ahead of schedule and may cap its emissions much sooner than 2030.

Other world leaders in the past week have urged the U.S. to follow China’s lead and accelerate its emissions commitment, not abandon it.

“The effects of climate change are dangerous and they are accelerating,” United Nations Secretary-General Antonio Guterres said in a speech this week. “It is absolutely essential that the world implements the Paris agreement and that we fulfill that duty with increased ambition.”

Former Obama administration officials, especially those were deeply involved in negotiating the deal, also made a last-ditch appeal to keep the accord in place.

“Billions of grandkids will have to live with this decision, however it lands. Think of them, please,” former Secretary of State John Kerry tweeted Wednesday.

Mr. Obama’s Energy secretary, Ernest Moniz, said that Mr. Trump “will be judged harshly by history” if he scraps the agreement.

As a practical matter, formal withdrawal from the agreement could take as long as three years, though the administration already has taken a number of steps that amount to a de facto rejection of Paris.

The EPA, for example, already has started to unwind the Clean Power Plan, a set of regulations limiting carbon emissions from power plants that’s central to meeting the 26-percent target laid out in the agreement. Other regulations aimed at reducing emissions also have been axed by the Trump White House.