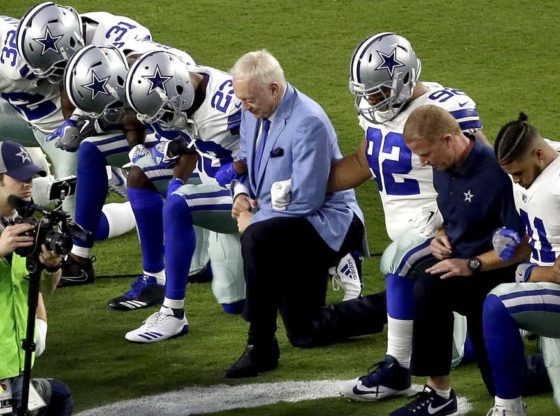 Faced with a blitz of fan outrage, at least two NFL team owners have clamped down on players refusing to stand for the national anthem, saying the protests have become for many viewers a symbol of disrespect for the flag.

Dallas Cowboys owner Jerry Jones told reporters Sunday that he would bench players who refuse to stand, arguing that the team cannot “give the implication that we tolerate disrespect to the flag. We cannot do that.”

Meanwhile, Miami Dolphins owner Stephen Ross, who has applauded taking a knee against racial inequality, said at a pre-game tailgate event that President Trump has flipped the script on players refusing to stand for “The Star-Spangled Banner.”

“It’s a different dialogue today,” Ross said in the Palm Beach Post. “Whenever you’re dealing with the flag, you’re dealing with something different. [Trump] has changed that whole paradigm of what protest is. I think it’s incumbent upon the players today, because of how the public is looking at it, is to stand and salute the flag.”

The President praised the Cowboys owner on Monday night, tweeting, “A big salute to Jerry Jones.”

Dolphins coach Adam Gase said at a press briefing that players who object to standing may remain in the locker room or tunnel during the ceremony.

“It’s just a decision made that we’re going to stand, and if guys don’t want to stand, stay in the locker room,” Gase said.

How players will react remains to be seen, but already the protests have lost steam after peaking during the Sept. 24-25 games, when nearly 200 sat or took a knee in reaction to Trump’s suggestion that owners should fire players who kneel.

On Sunday, about 30 players refused to stand, and 23 were from the San Francisco 49ers, who held a mass protest in Indianapolis. Vice President Mike Pence was in attendance and reacted by walking out with his wife Karen.

The owners were met with criticism Monday by supporters of the take-a-knee protests, including ESPN anchor Jemele Hill, who was suspended for two weeks by the network after she called for targeting Dallas Cowboys advertisers with a boycott.

Neither Jones nor Ross suggested firing players, but there was debate over whether owners would be allowed to discipline those who refused to stand for the national anthem under the NFL’s collective-bargaining agreement.

The NFL Players Association pushed back with a statement: “We should not stifle these discussions and cannot allow our rights to become subservient to the very opinions our Constitution protects. That is what makes us the land of the free and home of the brave.”

“This anthem situation has just blown up all over everybody involved,” said sports commentator Kevin Blackistone on ESPN’s “Around the Horn.” And now you have an owner like Jerry Jones coming out and making a statement like that knowing full well that that cannot be implemented. It’s not a part of the CBA.”

Marc Edelman, law professor at the Baruch College Zicklin School of Business, said that players working for a private-sector business like the NFL don’t enjoy First Amendment protections while on the job.

“To the extent that the NFL teams are private entities that are playing in facilities that are deemed to be private facilities, which almost certainly seems to be the case with the Cowboys and Dolphins, the players do not have a First Amendment freedom of speech, which is a right that extends to state actors,” Edelman said.

At the same time, he said the CBA included limits on how teams may discipline players for conduct both on and off the field.

“So Jerry Jones’s claim that he does not have to play players that refuse to stand for the anthem seems comparatively stronger than the argument that he may fine or fire players,” Edelman said. “It would be very difficult to take away a player’s paycheck. That is something that would have to go through league review and arbitration through the league.”

Dolphins wide receiver Kenny Stills, who took a knee at the Oct. 1 game, said he and two other players abided by the team’s new rule by remaining in the locker room on Sunday, but that they would “continue to focus on the work that we’re doing in the community.”

“We were told either to stand for the anthem or stay in the locker room, so that’s what we did,” said Stills in a video posted by the Miami Herald. “It’s not about what I think about, or anything like that, it’s about the work that we’re doing, and it’s never been about the protest or the flag or any of that.”

Fox Sports anchor Jason Whitlock said Monday he supported the owners’ decisions and hoped the rest of the teams would follow suit, arguing that the episode has become “damaging to all the partners, including the players.”

The owners are “giving you millions of dollars. You can take those millions and support any cause you want with that money, and they won’t object, and there’s nothing you can do about it,” Whitlock said on “Speak for Yourself.” “They’re asking you, ‘When you put on my uniform, I don’t want this to happen.’”

Former NFL tight end Tony Gonzalez said that he thought the protests had run their course.

“They made their point. It did some awakening. It shook some things up. You cannot deny that. Some big stuff happened,” Gonzalez said. “But now, I believe it’s coming to an end. Now it’s becoming a huge distraction that has nothing to do with the sport that we love, that we want to watch. You’ve got the vice president coming there to do his protest now.”

He added, “Let’s get back to playing football. Just do something different, because the way they’re doing it now, it’s over.”