Home /Featured, News & Politics, Social, Sports/It’s Not Sunday Football As Usual As Debate On Protesting The National Anthem Heats Up 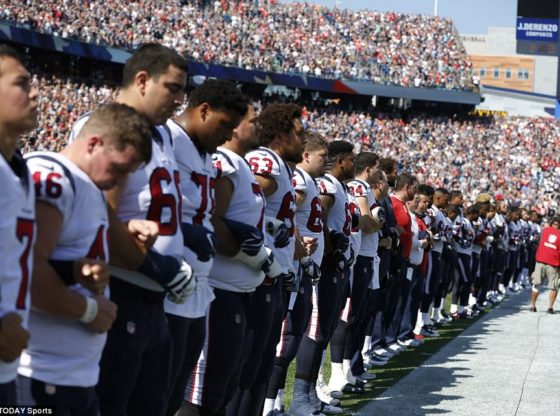 The intersection between sports and politics came to a head-on this weekend after President Trump’s comments on Friday that NFL owners “should fire any players” who disrespect The Flag by choosing to kneel during the National Anthem.

The President later doubled and even tripled down on the issue suggesting that fans should boycott both the NBA and NFL in a Sunday morning tweet.

“If NFL Fans refuse to go to games until players stop disrespecting our Flag & Country, you will see change take place fast.  Fire or suspend!”

“NFL attendance and ratings are WAY DOWN.  Boring games yes, but many stay away because they love our country.  League should back U.S.” he tweeted.

NFL players and owners are divided on how to deal with President Trump’s call to fire anyone who disrespects the flag by protesting the National Anthem.  In some cases, entire teams with the backing of their owners joined in the protest during the games on Sunday while others stood in a team-wide display of unity in support and honour of the National Anthem and flag.

Teams like the New England Patriots, Atlanta Falcons, Buffalo Bills, Denver Broncos, New York Giants, Detroit Lions and New Orleans chose to protest the National Anthem by taking a knee rather than stand in honour of the Star-Spangled Banner.

While 16 other Patriots took a knee in protest, New England Quarterback Tom Brady stood in locked arms with other teammates in unity to honour The Flag and National Anthem.

Other teams like Tampa Bay Buccaneers, Miami Dolphins, Chicago Bears, New York Jets, Philadelphia Eagles, Minnesota Vikings and Indianapolis Colts were split with some players standing with locked arms in support of the National Anthem while others chose to kneel.

The Pittsburgh Steelers on the other hand chose to stay in the locker room during the anthem before their game against the Chicago Bears.

In defense of his decision not to have players on the sideline during the National Anthem, the Steelers coach said, “We’re not going to play politics.  We’re football players, we’re football coaches,” said Mike Tomlin.

“We’re not participating in the anthem today – not to be disrespectful to the anthem but to remove ourselves from the circumstance.”

The polarizing conversation began last Friday when President Trump brought up the topic that the majority of the country agrees with.  Speaking at a rally in Alabama, the President suggested that NFL owners “should fire any players” who protest the National Anthem by refusing to stand thereby disrespecting the flag.

“Wouldn’t you love to see one of these NFL owners, when somebody disrespects our flag to say, ‘Get that son of a b***h off the field right now. Out! He’s fired!”

The statement appears to have unified some players and owners and divided other teams, with the most blatant action coming from Wembley Stadium in London where the Baltimore Ravens and Jacksonville Jaguars played on Sunday.

The Ravens took a knee during the Star-Spangled Banner while some Jags locked arms together with owner Shahid Khan in solidarity.  Both teams, however, chose to stand in honour of Britain’s God Save The Queen anthem.

On this issue, about 70% in contrast to 30% of the population disagree with players using the field to protest their social grievances and agree with President Trump on the depoliticization of the sport.  The polarization borders on patriotism, respect for the flag and National Anthem including love of country with the Take A Knee proponents seen to be against all of the above.

“I think that the President is standing with the vast majority of Americans who believe that our flag should be respected,” said the White House Director of Legislative Affairs on NBC’s Meet the Press.

“I think the President’s saying that ‘yes’ players have a First Amendment right…[But] NFL owners also have a right and that right is that these players represent their teams. If these owners want to get rid of them, they should be allowed to get rid of them.”

The President’s comments while prompting a pushback from some NFL players and team owners, it also helped exposed the hypocrisy of the Take A Knee protest advocates whose rule cause for protest is not clearly defined other than a protest against anything and everything about the President they resent and wish was not in the White House.

The President has a lot more support on this issue than sport media and the NFL.  The majority of Americans agree with him and support everything he has said so far because they see this as a sensitive issue of respect for the country, military and first responders who give their lives everyday for the country and for them to enjoy these same freedoms.

What the majority of Americas object to is turning the pitch into a social justice platform by these players at the expense of the paying public and viewers of the game at home.

While players have a right to exercise their free speech, the feeling among the public is that they should do so at their OWN time and not on the field at the expense of the paying public – whether at home watching or at the stadium.

“You know the NFL has all different types of rules…[I think] what the President is saying is that the owners should have a rule that players should have to stand and [show] respect for the national anthem,” said Treasury Secretary Steve Mnuchin.

“This is about respect for the military and the first responders and the country.”

While critics and opponents of this President have chosen to frame this issue in terms of racial politics, unlike Barack Obama who revelled in radicalized politics of division, President Trump has insisted that this is a non-racial issue but one of patriotism, love of one’s country and respect for both The Flag and National Anthem.

The ‘Take A Knee’ protest was started 2 years ago by former San Francisco 49er Quarterback Colin Kaepernick who said at the time, he was protesting Police brutality against minorities.

That position has since evolved to include other non-related social and political issues without clarity as to the real purpose of the action other than a unified resistance to President Trump and his policies by many Black players.

The NFL has been politicized for some time but moreso since Barack Obama’s tenure at the White House.