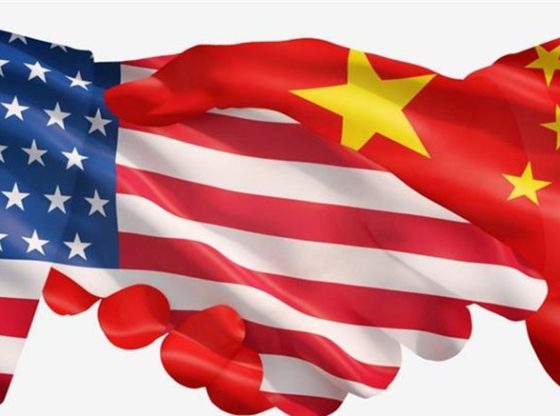 President Trump persuaded China to freeze all financial transactions with North Korea and ordered a new round of U.S. sanctions Thursday, closing out his first U.N. General Assembly with a major diplomatic victory in his efforts to curb Pyongyang’s nuclear weapons and missile programs short of war.

In a carefully choreographed strategy deployed from the shadow of the United Nations headquarters in New York, Treasury Secretary Steven T. Mnuchin called the head of China’s Central Bank very early on Thursday to alert him that President Trump was preparing an Executive Order to sanction any financial institutions doing business with North Korea. He asked for the cooperation of China, the main source of North Korea’s cash.

Hours later, the People’s Bank of China announced it was directing all other banks in China to halt financial transactions with North Korea.

Soon afterward, President Trump signed an Executive Order in a meeting with the two Presidents of South Korea and Japan, expanding the Treasury Department’s ability to freeze assets of banks or individuals doing business with Pyongyang.  He praised China’s action, saying it was “somewhat unexpected.”

“For much too long, North Korea has been allowed to abuse the International Financial System to facilitate funding for its nuclear weapons and missile programs.  Tolerance for this disgraceful practice must end now,” said the President.

The tightening of screws on North Korea culminated to President Trump’s weeklong effort to galvanize more international pressure on Pyongyang and its rogue regime.  Two days later, more coordinated and expanded sanctions were announced, further warning that the U.S. was prepared to “totally destroy” North Korea if it attacked any of its territory or its allies.

Thorugh a translator, President Moon of South Korea praised President Trump for his handling of the Korean Crisis saying, “North Korea has continued to make provocations, and this is extremely deplorable and this has angered both me and our people but the U.S. has responded firmly and in a very good way.”

On Friday, North Korean leader Kim Jong-un said North Korea would consider the “highest level of hardline counter-measure in history” against the U.S. in response to President Trump’s threat to “totally destroy” the North.

According to analysts, President Trump’s thinly veiled threat of sanctions against Chinese banks, his lobbying of Chinese President Xi Jinping and even perhaps his threat of nuclear war may have prompted the Chinese to act against North Korea.

“U.S. pressure is having an effect,” said Bill Bishop, a China analyst and publisher of the Sinocism newsletter. “If the U.S. decides to ratchet up secondary sanctions another notch, expect sanctions and/or penalties against a large [People’s Republic of China] bank like China Merchants, but not one of the big four.”

“My sense is that it is not sanctions and the U.N. but rather China’s fear that the North Korea situation is spiraling out of control that is leading Beijing to take these steps,” said Michael Desch, Director of the International Security Centre at Notre Dame University.

“The last thing China wants is a war on its border that, at a minimum, could remove a key buffer between it and an American ally and at a maximum could result in a thermonuclear war right next door.”

Republican Sen. Ben Sasse of Nebraska said the Trump Administration’s sanctions “are aimed squarely at North Korea’s despot but also remind China that it has a strong interest in preventing a nuclear arms race in Asia.”

“Time will tell if today announcements by President Trump and China’s Central Bank will work to force Mr. Kim to the negotiating table or embolden him in his approach of the last few weeks,” said Mr. Ward.

So far, the North Korean dictator has resisted international calls for his country to scale back the development of intercontinental ballistic missiles (ICBMs) and nuclear weapons.

Apparently, North Korea reportedly a hydrogen bomb test on September 3, 2017, its sixth and largest nuclear test. It has also launched more than a dozen missile tests this year, including two rockets that have flown over Japan.  The regime in Pyongyang also upped its ante by threatening to attack the U.S. territory of Guam in the South Pacific.

The U.N. Security Council has approved two rounds of economic sanctions in recent weeks but has stopped short of more drastic steps such as a full oil embargo.

North Korean Foreign Minister Ri Yong-ho, who was also in New York for the UN General Assembly belittled President Trump’s tough stance on his country saying,  “If he was thinking he could scare us with the sound of a dog barking, that’s really a dog dream,” he told reporters on Wednesday.

President Trump blamed previous successive U.S. government administrations for allowing North Korea to get to this point which has developed into an international crisis.

“The United States has had representatives working on this problem for over 25 years…they have done nothing. That’s why we’re in the problem we’re in today, in addition to other countries, not doing what they should have done.”

Meanwhile, President Trump has said the sanctions coupled with the new Executive Order and Chinese action are all aimed at “a complete denuclearization of North Korea.”

“North Korea’s nuclear weapons and missile development is a grave threat to peace and security in our world,” said Trump said. “It is unacceptable that others financially support this criminal rogue regime.”

The executive order authorizes the Treasury Department to target “any individual or entity that conducts significant trade in goods, services or technology with North Korea.” The administration will also target industries such as textile, fishing and manufacturing for tougher sanctions.

Mr. Mnuchin, the Treasury Secretary indicated that, “Foreign financial institutions are now on notice that going forward they can choose to do business with the United States or North Korea, but not both.  We call on all countries around the world to join us in cutting off all trade and financial ties with North Korea in order to achieve a denuclearized Korean Peninsula.”

Mr. Mnuchin was positive enough to believe that the new measures will be more effective because Treasury now has the authority to “freeze or block any transactions, with any financial institution, anywhere in the world.”

“This is something that has been in the works for a while,” said Mnuchin. “It was about two weeks ago that I had been discussing this with the President and this was all part of the President’s strategy at the U.N. this week.”

President Trump’s new EO also bars planes and foreign ships that have visited North Korea from traveling to the U.S. within 180 days of that visit.

Lawmakers from both parties appear to approve of the new moves by the Trump Administration, with Foreign Affairs Committee Chairman, Edward Royce, a Republican referring to them as “important progress.”

“Finally, we are beginning to apply maximum pressure on Kim Jong-un,” he said

“We need direct talks now, first to freeze North Korea’s nuclear and ballistic missile programs, and then to reach a diplomatic solution that peacefully denuclearizes the Korean Peninsula,” he said Democrat Se, Edward Markey of Massachusetts.

“Only through the toughest economic sanctions along with sustained diplomacy can we force North Korea to the negotiating table.”

Meanwhile, the South Korean President made a plea at the UN General Assembly that, “We should manage the North Korea nuclear crisis in a stable manner so that tensions are not escalated too much or peace is not destroyed by accidental military clashes.”