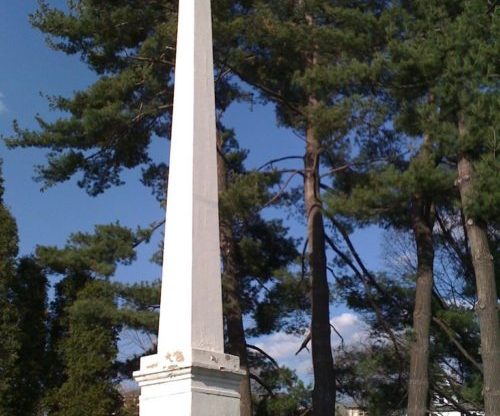 A 200-year-old Christopher Columbus monument was destroyed after being smashed with a sledgehammer overnight on Monday to rally against “hate-filled monuments” and combat a “culture of white supremacy.”

The destroyed monument which was accompanied by signs reading “Racism: Tear it Down” and “The future is racial and economic justice” is the oldest Columbus monument in the city and the whole of North America. It was first erected in 1792 to commemorate the 300th anniversary of Columbus’s arrival in North America, according to the Baltimore Sun.

Protesters smashed a hole in the monument, rendering its inscription, “Sacred to the Memory of Chris. Columbus Oct. XII MDCC VIIIC,” unreadable. The Baltimore Brew, an independent website run by veteran journalists first reported on the crime which occurred near Herring Run Park in Baltimore.

The monument’s destruction was captured on video which was posted on a YouTube channel titled “Popular Resistance” showing men in hoodies destroying a monument to Columbus and his famous voyage in 1492. The individuals carried signs that read “Racism: Tear it down,” and “The future is racial and economic justice.”

Located across from Baltimore’s Herring Run Park at the corner of Harford Road and Walther Avenue, the 44-foot tall obelisk is one of three Columbus monuments in Baltimore, with two others located in Druid Hill Park and the city’s Little Italy neighborhood.

“Christopher Columbus symbolizes the initial invasion of European capitalism into the Western Hemisphere,” said the video narrator identified only as Tye.

“Columbus initiated a centuries-old wave of terrorism, murder, genocide, rape, slavery, ecological degradation and capitalist exploitation of labor in the Americas. That Columbian wave of destruction continues on the backs of Indigenous, African-American and brown people.

Monday’s vandalism comes just days after the Baltimore City Council voted to begin removing the city’s Confederate monuments. The removed the Confederate Women’s Monument in Bishop Square Park, the Lee Jackson Monument in the Wyman Park Dell, the Confederate Soldiers and Sailors Monument on Mount Royal Avenue, and a statue of Justice Roger Taney near the Washington Monument last week.