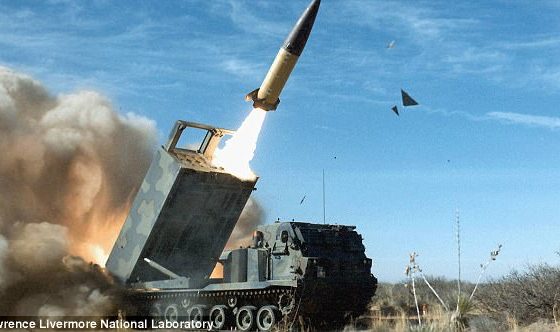 In a bid to counter Russia’s nuclear technology, the US Army is said to be considering resurrecting one of its most devastating, super weapon that moves three times the speed of sound and destroys everything in its path.  The Kinetic Energy Projectile (KEP) is a tungsten-based warhead capable of moving at speeds of Mach 3 to Mach 6 while destroying everything in its path.

The missile which was first tested in 2013 in New Mexico at Holloman Air Base Force can burst into flaming metal fragments that can pierce through most armor – such as the one used in tanks.   Reports indicate that Russia may have four times more powerful weapons than America’s MOAB or “Mother Of All Bombs” used in Afghanistan and killed 36 ISIS militants.  This is the Russian version of MOAB called “Father Of All Bombs.”

On a quest to find its own ‘super weapon’ the US Army came across the KEP.

Speaking at the Booz Allen Hamilton Direct Energy Summit, Major General Hix who is the Army’s Director of Strategy, Plans and Policy said, “Think of it as a big shotgun shell.”  He then continued to say unlike a shell, the KEP travels at unbelievable speeds of “Mach 3 to Mach 6.”

Speaking on its devastation capacity, the Major General said, “Not much can survive it.  If you are in a main battle tank, if you’re a crew member, you might survive but the vehicle will be non-mission capable and everything below that with level of protection will be dead.

During the warhead’s first test in 2013, the sled train it was attached to exceeded 3,500 feet per second, three times the speed of sound.  The Army suggests it may attach the KEP to its existing launch platforms as they are able to take the brunt when the weapon is fired.

In another development, the United States sent its ‘sniffer’ plane on Thursday to the Korean Peninsula amid fears North Korea may have tested another nuclear missile.  The stealth bomber is designed to test for radioactive debris whenever there is a nuclear explosion.  It remains unclear what the purpose of the mission was.

Unconfirmed rumours also suggest that North Korea may have conveyed to the Chinese its intention to carry out another test.  South Korea has indicated concern that its neighbor to the North appears to be preparing for yet another test launch which if confirmed, it could be the 6th one carried out by the rogue regime.

South Korea has said Kim Jong-Un could detonate a nuclear weapon anytime.  This is something that the United States as leader of the free world will never to allow to happen and is doing everything to ensure it doesn’t occur.