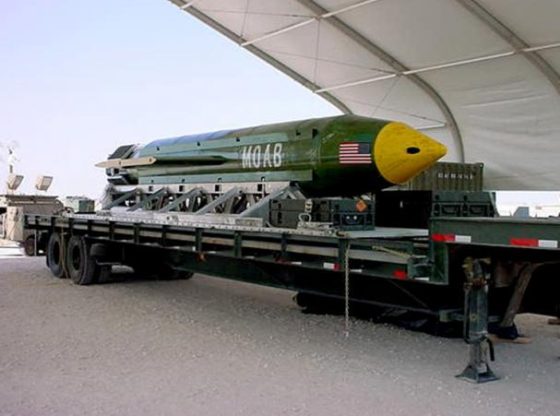 The Russian version of the US’s ‘Mother Of All Bombs’ (MOAB)- called the Father Of All Bombs – weighs just 15,560lbs and is packed with the equivalent to 44 tons of explosive TNT.

This is four times more than the US’ model which obliterates anything in its blast zone, which is twice that of the MOAB.

Putin’s monster explosive is known officially as the Aviation Thermobaric Bomb of Increased Power and is reportedly four times bigger than MOAB.

It carries 44 tons of TNT and explodes in the same way as its American counterpart, obliterating anything within the blast zone, collapsing buildings and producing huge blasts and aftershocks.

Although – like the MOAB – it is not nuclear, the aftermath of the bomb could be comparable to a nuke being deployed.

It was test-fired by the Russians in 2007 where the temperature produced by the blast was also twice as high as that in the MOAB.

The Russian FOAB’s blast zone has been predicted as twice that of the US bomb and even though it is smaller in size, because of the temperature it explodes at and the fact there are four times more explosives crammed inside, it is much more powerful.

Although the figures relating to the FOAB have been widely circulated by the Russians, there are no public pictures of it, which has led US Defense analysts to question the claims of its power and size.

Article by Stacy Liberator For DailyMail.com