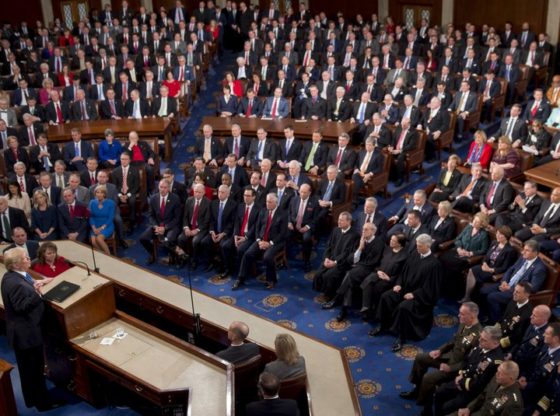 With the wind on his back, President Trump is set to issue his 2019 State Of The Union (SOTU) address before the Joint House of Congress on Tuesday at 9:00 pm EST during primetime.

This will be his second address since becoming President and the first time that he will be addressing a House filled by Democrats after they regained control last November in the 2018 midterm elections.

Coming at the heels of the government shutdown, this will be the most watched SOTU, not only in the US but worldwide asPresident Trump is expected to lay out his domestic and foreign policy agenda moving forward.

The SOTU address is a bully pulpit that offers the President an opportunity to highlight his successes, outline his foreign and domestic policy agenda as well as speak directly the people.

In addition, the SOTU address is a powerful platform that offers the President an opportunity to speak directly to Americans from both sides of the political divide on contentious, highly partisan issues of a polarizing nature like immigration, border security and the on-going debate over the funding of the border wall at the U.S. southern border with Mexico.

The pomp and pageantry of the occasion is a tradition that Americans hold dear and look forward to, a rare occasion where all three levers of government are all present under one roof.

Despite the blatantly partisan divide in the age of Trump, this is an opportunity for the President to extend the message of reconciliation, unity, building new coalitions, bipartisanship and compromise.

Another symbolic feature of the SOTU are the people invited by the President and The First Lady to the address.  The guest list often says a lot about the theme of the address while and offers a hint of issues to be highlighted during the speech.

Expected today will be 13 people invited by the President and First Lady Melania Trump to attend the SOTU address. Below are some of the people in this year’s White House guest list.

Joshua Trump (no relation to the President), is an 11-year old  6th-grader from Delaware. He is a victim of constant bullying forced to drop out of school simply for sharing a similar lastname as the First Family – Trump.

Alice Marie Johnson is the  first-time drug offender who served 21-years before her sentence was commuted last June by President Trump after a meeting with Kim Kardashian.

Also present will be three surviving family members of an elderly Reno couple, 81-year old Gerald David and his wife Sharon (80) who were brutally murdered in their home by an illegal alien in January. Debra Bissel, Heather Armstrong and Madison Armstrong are the daughter, granddaughter and great-granddaughter of the Davids.

Ashley Evans, a recovering opioid addict who “struggled with opioid and substance for much of her life,” according to the White House, highlights the Trump Administration’s effort to tackle the endemic opioid crisis and substance abusive problem which have devastated most Americans.

Another guest seated in the booth this evening will be the Tom Wibberley, father of 19-year old Navy Seaman Craig Wibberley, killed in a terrorist attack on the USS Cole in October 2000.

To highlight the Administration’s commitment on tackling human trafficking will be Elvin Hernandez, a special agent with the Trafficking in Persons Unit at the Department of Homeland Security (DHS) as well as Roy James, a plant manager at a lumber facility in Mississippi to highlight the successful jobs and tax cut bill.

The President is expected to send a message of healing in the hopes of bringing a divided nation together.