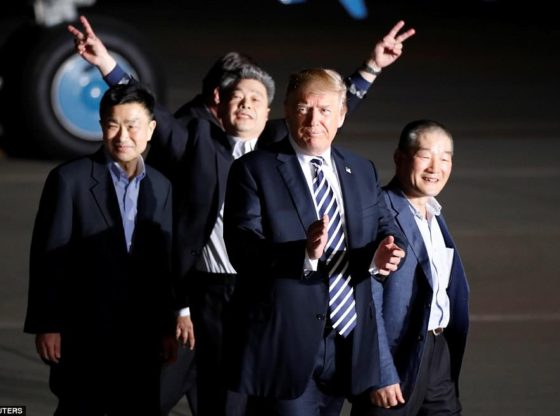 In an extraordinary scene and moment of national pride, President Trump welcomed the three freed Americans hostages released by North Korea back to U.S. soil with words most foreign policy and international relations observers including the overall diplomatic community never thought a seating American President would ever utter: “We want to thank Kim Jong-un.”

In a major diplomatic victory for the Trump Administration and praised by the international community, President Trump stayed up to personally welcome three freed American hostages who had been imprisoned by North Korea.

The President and First Lady Melania arrived at Andrews Air Force Base in Washington at 2:00 a.m. EST to personally greet former hostages Kim Dong Chul, Kim Hak-song and Tony Kim who arrived at 3:00 am EST.

In an extraordinary scene and moment of national pride, President Trump welcomed the three freed Americans hostages released by North Korea back to U.S. soil with words most foreign policy and international relations observers including the overall diplomatic community never thought a seating American President would ever utter: “We want to thank Kim Jong-un.”

“This is a special night for these three really great people,” said Trump to the global press that was broadcasting the event live.

“We are starting off a new footing,” he declared, in reference to the U.S.-North Korean relations.

The First Couple later boarded the medical plane on which the detainees had traveled and spent several minutes meeting with them privately. The trio later emerged from the plane where they held up their arms in exuberance.

In extraordinary scenes, President Trump and the First Lady clapped and cheered as the three freed hostages walked down the steps waving their arms in the air in symbolic gestures of ‘V’ – a triumphant signal of victory and in this case, a sign of peace, too.

U.S. service members on the tarmac also burst into applause and cheers.

The 3 prisoners who were handed over to former CIA Director turned U.S. Secretary of State Mike Pompeo as a precondition to any meeting with the U.S. President and after meeting with Kim Jong Un, is a diplomatic coup for the United States and President Trump regardless of the outcome.

The release also clears a major obstacle to an unprecedented upcoming summit between the two leaders – Donald Trump and Kim Jong Un in Singapore on June 12, 2018.

A statement released by the State Department on behalf of the three hostages said, “We would like to express our deep appreciation to the United States government, President Trump, Secretary Pompeo, and the people of the United States for bringing us home,” read a statement by the three released by the State Department as their plane stopped over in Alaska.

“We thank God, and all our families and friends who prayed for us and for our return. God Bless America, the greatest nation in the world,” they added.

The hostages who arrived aboard Pompeo’s diplomat plane at Andrews were greeted personally by the President and First Lady Melania Trump together with Vice President Mike Pence and his wife Karen Pence.

The release, praised by the White House as a “gesture of goodwill,” is perceived as a PR stunt by Pyongyang or at least an effort by Jong Un to set a more favorable tone for the upcoming summit to discuss among other things the denuclearization of the Korean Peninsula, possibly leading to a full suspension of NOKO’s missile program.

“I appreciate Kim Jong Un doing this and allowing them to go,” Trump told reporters at the White House.

Kim’s handover of the Americans was in response to an “official suggestion” from Trump, the North Korean state news agency KCNA said in its account of the talks with Pompeo. It was their second encounter in less than six weeks to prepare the first-ever meeting between sitting U.S. and North Korean leaders.

Trump said an agreement had been reached on a date and venue for the historic summit between the two leaders, the date and location which he later announced via his most preferred platform – Twitter – on Thursday morning.(also insert link to article here).