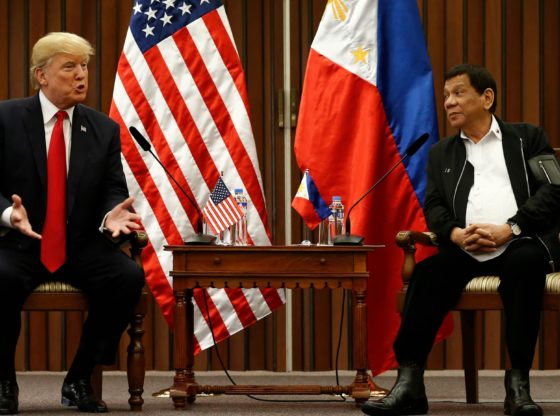 President Trump is in the Philippines to wrap up his 12-day foreign trip to Asia where he met with Southeast Asian leaders and attended a two-day economic summit of the Association of Southeast Asian Nations (ASEAN).

This is the final leg of a 5-Nation marathon tour of the Pacific Rim which took him to Japan, South Korea, China, Vietnam and now the Philippines.  He will be heading back to the U.S. on Tuesday.

After partaking in a group photo shoot with other regional leaders, President Trump was hosted to an extravagant dinner in the capital, Manila, where the controversial host, President Rodrigo Duterte, set the tone for cordiality ahead of the ASEAN summit.

The controversial 72-year old Filipino President is best known for his remarks of Barack Obama when he called him a “Son of a whore” and also as recent as this past week during a meeting, he again referred to him as “Black and arrogant.”

In addition to the economic summit, President Trump held a  series of bilateral meetings with regional allies including Australian, Indian and Japanese Prime Ministers.

“We’ve made some very big steps with respect to trade, far bigger than anything you know,” said Trump during a meeting with close friend and ally – the Japanese Prime Minister Shinzo Abe and Australia’s Malcom Turnbull.

While the dominant headline of the trip has been North Korea and its provocative missile launches, other issues such as trade and security were central themes of focus on this trip.

During his session with Australian and Japanese leaders, Trump also pointed out that, “This has been a very fruitful trip for us,” in reference to the overwhelming response by other nations to put an economic squeeze on North Korea and the regime in Pyongyang, a position advanced by his administration.

At least there seemed to be a unanimous consensus among the 3 major allies when it comes to the provocative regime in Pyongyang.

“For the three of us, the immediate challenge is North Korea,” said Abe.

“We’ve got the same values and the same focus – ensuring that the North Korean regime comes to its senses and stops its reckless provocations and threats of conflict on our region,” added Turnbull.

President Trump praised the overall reception and the way he was treated by the host nations of the countries had visited.

“Red carpet like I think probably nobody has ever received. That really is a sense of respect, perhaps for me a little bit, but really for our country, and I’m very proud of that,” said Trump.

Trump also met with Russian President Vladimir Putin at an economic summit in Vietnam, a brief encounter that sparked more arguments at home in the U.S. over the alleged Russian interference in last year’s Presidential Election.

President Trump and his entourage who left Washington D.C. on November 3 will be returning back to the U.S. on Tuesday after an extra day was added, changing the trip from 11 to 12 days.

The 12-day foreign trip to Asia covering 5-Nations of the Pacific Rim and which came a year after his electoral victory is the longest regional trip by a U.S. President in 25 years.