President Trump In Asia On A 5-Nation Foreign Trip 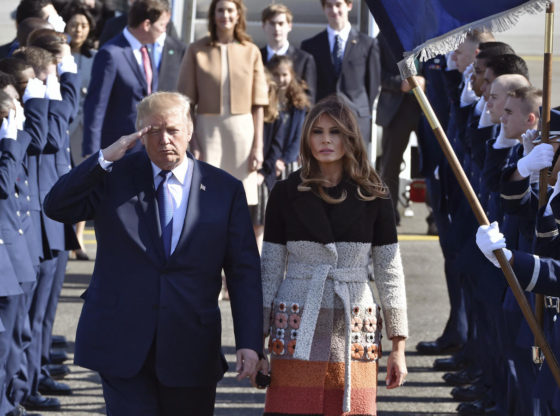 President Trump left the United States on Friday on a high stakes 5-nation trip to Asia that will take him to Japan, China, South Korea, Vietnam and the Philippines as tensions rise due to the North Korean threat. The 12-day extended trip to the Pacific Rim countries will be the longest Asian trip by a U.S. President in 25 years since George H.W. Bush in the 1992.

The pivotal trip, which was extended by one day will put President Trump right at Kim Jong Un’s doorstep and the North Korean artillery.

As he heads to Tokyo and Beijing, the global focus will be on his meetings with Asian leaders at a scheduled U.S-ASEAN and East Asian summit in the Philippines during the last leg of this pivotal foreign trip.

Accompanied by his wife, the First Lady Melania Trump, the Trumps arrived in Hawaii on Friday, by then, it was early Saturday morning local time, departing for Japan later in the day.

They arrived in Japan on Sunday for the first leg of the trip where the President Trump addressed combined U.S. forces at the U.S. Yokota Air Base in Tokyo.

President Trump who is an avid golfer will play golf with Japanese Prime Minister Shinzo on Sunday where they will be joined by legendary Japanese golfer Hideki Matsuyama who is ranked 4th in the PGA World Rankings.

Abe and Trump formed a personal relationship back in February when the Abes visited the U.S. on an official state visit and the Trumps hosted them at their Mar-a-Lago resort club.

From Japan, the Trumps will head to South Korea where plans to visit the De-Militarized Zone (DMZ) by the President have been shelved due to security concerns.  While there, much of the global focus will be on President Trump’s speech that he is expected to deliver at the country’s National Assembly.

The tone, content and messaging of the speech will be points of focus not just in the region facing regional threat and instability but  a global community of nations also concerned with the rogue North Korean regime ‘s provocative nuclear program.

The third leg of the trip will take President Trump to Beijing on a 2 day visit where he will meet with his Chinese counterpart, President Xi Jinping over pressing issues of security and trade.

With North Korea’s growing threat to the region, Beijing’s influence over Pyongyang and its rogue leader, the “Little Rocket Man” will be put to test as the world watches both the communication and response from the world’s most unpredictable President in modern history.

According to the White House, the Chinese leg of the trip will be an official State visit that will also include undisclosed commercial and cultural events in addition to bilateral talks.

The fourth leg will take the Trumps to Vietnam where they are expected to visit Hanoi and Da Nang on November 11 and 12.  A defining moment of the Vietnamese leg of the trip will be another speech that will be delivered by the U.S. President at the annual APEC Summit Hanoi as well as an expected with bRussia’s Vladimir Putin for bilateral talks in Da Nang.

The final leg of the Trump’s journey to Asia is the Philippines where Presidents Trump and Rodrigo Duterte will meet for the first time.

While in Japan, President Trump will call on the Japanese Imperial Family.  Unlike his predecessor, Barack Obama who generated controversy when he bowed to the imperials during his trip in 2009, Trump is not expected to make the same mistake by bowing to foreign power, no matter the cultural symbolism.

President Trump is expected to hit the ground running on this historic trip that has generated a lot of global attention due to geopolitical threat and security.  While trade is big on the agenda on this trip, security is a major issue with the threat posed by North Korea.

Those sentiments were uttered by the President’s National Security Advisor, General H. R. McMaster who travelled with the him.

“The President will continue to call on all responsible nations especially those with the most influence over North Korea, to isolate the North Korean regime economically and politically, to convince its leaders that the pursuit of nuclear weapons is a dead end and that it is past time to denuclearize.

“And he will remind friend and foe alike that the United States stands ready to defend itself and our allies using the full range of our capabilities,” he warned.

“North Korea is a threat to the entire world.  So all nations of the world must do more to counter that threat,” he said in reference to the President’s message to regional leaders.  “That is happening. But the President recognizes that we’re running out of time and will ask all nations to do more.”

According to Fox News’ John Roberts, President Trump confirmed to journalists on Air Force One enroute to Japan from Honolulu that he expects to meet with Russian President Vladimir Putin on bilateral talks.  He is also expected to try and get more cooperation with Russia on North Korea.

On the question of whether or not he will designate North Korea a sponsor of terrorism, it remains to be seen on what he will say during his address to Asian leaders during the summit.