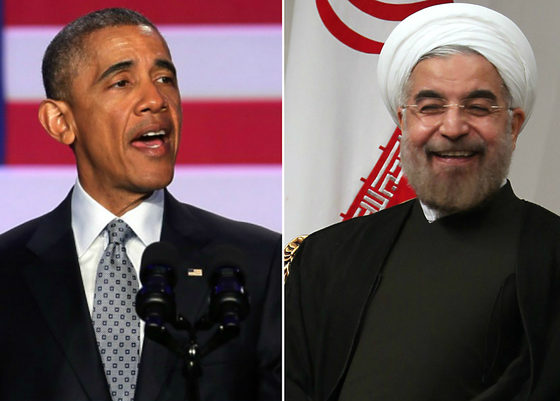 President Trump on Friday dealt another huge blow to the Obama legacy by choosing to decertify the flawed and disastrous Iran Deal.  He has given Congress 60 days to come up with a tougher stance on Iran, stopping short of ending what he sees as a  “horrible” the international agreement he has called in totality.

In an address from the White House, the President also said he’s directing the Treasury Department to sanction Iran’s Revolutionary Guard Corps (IRGC) over its support of terrorism in the Middle East, calling it a “long overdue step.”

“We will not continue down a path whose predictable conclusion is more violence, more terror and the very real threat of Iran’s nuclear breakout,” said President Trump. “Iran is not living up to the spirit of the deal.”

President Trump, who has called the 2015 agreement signed by Barack Obama a “horrible” deal and threatened to rip it up, has asked Congress to beef up restrictions on the rogue regime in Tehran.  He has left open the option to terminate the agreement altogether.

“I may very well do that. I like a two-step process much better,” the President told reporters.

His action will have no immediate impact on the six-nation agreement that calls for Iran to submit to international nuclear inspectors in exchange for lifting of economic sanctions.

“This is purely an internal domestic decision,” said Secretary of State Rex W. Tillerson who also said the President faced a choice of either walking away from the international accord or trying to strengthen it through unilateral domestic action.

“The US has always tried to bring the Islamic Republic to its knee throughout the history and the Iranian nation would never forget their animosity,” said the Ayatollah on Friday during a speech in Tehran.

Meanwhile, the Iranian Foreign Minister is said to have spoken with both the German Foreign Minister and EU Foreign Policy Chief shortly after President Trump’s announcement. The discussions, according to Iranian media outlets, were focused on alternatives to preserve the nuclear deal, without U.S. participation.

The United Kingdom, Germany and France said in a statement that they “are concerned by the possible implications” of President Trump’s action.

“We stand committed to the [nuclear deal] and its full implementation by all sides. The nuclear deal was the culmination of 13 years of diplomacy and was a major step towards ensuring that Iran’s nuclear program is not diverted for military purposes,” read the statement.

Speaking to reporters, President Trump said that European leaders such as French President Emmanuel Macron and British Prime Minister Theresa May are concerned about his action because European firms are doing more business with Iran since sanctions were lifted.

“They would love me to stay in, only for one reason — look at the kind of money that’s being spent,” said Trump.  “Iran is spending money in various countries.

“Emanuel [Macron] called up and he talked to me. I said ‘Look, Emmanuel, they just gave [automaker] Renault a lot of money. Take their money, enjoy yourself.’ But we’ll see what happens. Iran has to behave much differently.”

In his address, the President reminded Americans of Iran’s involvement in some of the most tragic and humiliating episodes for the U.S. on the world stage, beginning with militants’ seizure of the U.S. embassy in Tehran in 1979 and the holding of dozens of American hostages there for 444 days.

He went on to list bombings by Iranian-backed terrorists of the U.S. embassy in Beirut, Lebanon, of a Marine barracks in Lebanon and other attacks against Americans in Saudi Arabia and in east Africa.

President Trump also criticized the Obama administration for agreeing to lift economic sanctions as part of the deal in 2015 “just before what would have been the total collapse of the Iranian regime.”

The President said wants Congress to strengthen enforcement of the deal to prevent Iran from developing an intercontinental ballistic missile (ICBM), and “to make all restrictions on Iran’s nuclear activity permanent under U.S. law.”

Sen. Tom Cotton, Arkansas Republican and a vocal critic of the Iran deal, said he and Foreign Relations Chairman Bob Corker of Tennessee have crafted legislation with the White House to address the President’s concerns.

“Lawmakers need to do now what we couldn’t do two years ago: unite around an Iran strategy that truly stops Iran’s nuclear weapons program and empowers the United States and our allies to combat the full spectrum of Iran’s imperial aggression,” Mr. Cotton said.

“The legislation Senator Corker and I have been working on with the administration will address the major flaws in the original Iran deal: the sunset clauses, the weak inspections regime, and the failure to restrict Iran’s development of advanced centrifuges. And it will create time and leverage for firm diplomacy — together with our allies — to work and neutralize the threat of a nuclear Iran permanently.”

President Trump who had always been very critical of the Obama Administration’s negotiations said Barack Obama allowed Iran to receive a huge cash infusion of more than $100 billion to help fund terrorist activities. He even mentioned the often criticized Obama-decision to fly crates of cash to Tehran as the deal was sealed.

“I wonder where all that money went,” said the President sarcastically. “The deal allows Iran to continue developing certain elements of its nuclear program. What is the purpose of a deal that at best, only delays Iran’s nuclear capabilities for a short period of time?”

Secretary of State, Rex Tillerson said the Trump Administration considers the nuclear deal “weak” because it doesn’t address Tehran’s support of terrorism, and its provisions against the Iran working on nuclear weapons phase out within 15 years.

The White House pointed out that the new strategy for Iran approved by the President “is the culmination of nine months of deliberation with Congress and [US] allies on how to best protect American security.”

The plan focuses on “neutralizing the government of Iran’s destabilizing influence and constraining its aggression, particularly its support for terrorism and militants,” said the White House.

“We will revitalize our traditional alliances and regional partnerships as bulwarks against Iranian subversion and restore a more stable balance of power in the region,” stated a fact sheet from the Trump Administration.

“We will work to deny the Iranian regime — and especially the Islamic Revolutionary Guard Corps — funding for its malign activities, and oppose IRGC activities that extort the wealth of the Iranian people. We will counter threats to the United States and our allies from ballistic missiles and other asymmetric weapons.”

Russia, which is a party to the international accord, said on Friday that abandoning the deal could “seriously aggravate the situation.”

President Trump’s speech from the White House will outline specific faults he finds in the pact but will also focus on an array of Iran’s troubling non-nuclear activities, four officials and advisers said. Those include Tehran’s ballistic missile program, support for Syrian President Bashar Assad, Lebanon’s Hezbollah movement and other groups that destabilize the region, including in Yemen.

Under U.S. law, the President faces a Sunday deadline to notify Congress whether or not Iran is complying with the accord that was negotiated over 18 months by the Obama administration and determine if it remains a national security priority.

Although he will allow that Iran is living up to the letter of the agreement, he will make the case that the deal is fatally flawed and that its non-nuclear behavior violates the spirit of the regional stability it was intended to encourage, the officials and advisers said.

Secretary Tillerson said the President will not call for a re-imposition of nuclear sanctions on Tehran. He will instead urge lawmakers to codify tough new requirements for Tehran to continue to benefit from the sanctions relief that it won in exchange for curbing its atomic program.

And he’ll announce his long-anticipated intent to impose sanctions on portions of Iran’s Revolutionary Guard Corps (IRGC) by designating them terrorist organization under an existing executive order, according to the officials and advisers.

“The reckless behavior of the Iranian regime, and the IRGC in particular, poses one of the most dangerous threats to the interests of the United States and to regional stability,” the White House said in a statement released ahead of the speech.

The statement, which did not reveal the President’s decision, denounced the Obama administration for its “myopic focus on Iran’s nuclear program to the exclusion of the regime’s many other malign activities”.  The statement also said the same “mistakes” would not be repeated.

Maryam Rajavi, who is president-elect of the National Council of Resistance of Iran, welcomed President Trump’s new policy.

“Designation of the IRGC, the main instrument of suppression, export of terrorism and proliferation of weapons of mass destruction, as a terrorist entity is a long overdue, necessary step towards establishment of peace,” she said.

She said previous U.S. administrations’ policies ignored human-rights violations in Iran and the regime’s “deadly meddling” in the region.

“The ultimate solution is the overthrow of the regime and establishment of freedom and democracy in Iran by the Iranian people and resistance,” she said. “For years, a policy of appeasement has acted as the main impediment to change in Iran. It is time that the international community recognizes the aspirations of the Iranian people and stands with the people of Iran and their legitimate right for regime change.”