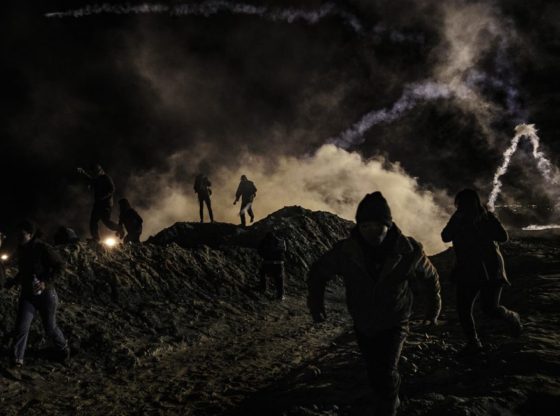 In another brazen incident on New Year’s eve, members of the migrants caravan camped at the U.S. border on the Mexican side in Tijuana, tried unsuccessfully to rush the border in a desperate attempt to enter into the U.S illegally as both countries celebrated the event.

This is not the first time this incursion has happened.

According to a Homeland Security official, the “violent mob” of  illegal immigrants which tried to force its way into the U.S. on New Year’s eve on Monday, was repelled by tear gas, smoke canisters and pepper sprays by US Border Protection officers who held their grown and forced them back to Mexico through the holes they came out from.

After they were repelled, the group of about 150 people became violent.  It is then that the mob started throwing projectiles including rocks towards U.S. Border Patrol officials.

The first time a similar incursion happened was in November when another violent mob broke through the fence and tried but failed to rush the U.S. border in similar fashion they had done in October to force their way into Mexico by rushing the Mexican-Guatemalan border overwhelming border officials from both those countries.

With each failed attempt to force their way into the U.S as they had done with their current host country – Mexico, members of the caravan that emanated in Central America are getting more desperate to enter America illegally including by whatever means necessary.

In what has become a blatant game of cat and mouse as well as a battle of wills, the migrants tried using previous tactics of pushing women and children to the forefront as a distraction and to be fired upon by U.S. Border officials but failed.  After strong condemnation in November for doing just that, U.S. Border officials did not take the bait but instead, fired towards the direction where most males were rushing the border.

President Trump’s policy of deterrence barring migrants from entering into the U.S. but requires that they stay in Mexico has become the source of frustration and desperation with members of the migrants caravan. The outcome has become these endless incursions and other desperate moves.

Some migrants have even resorted to pushing women and children through the razor wire at the U.S. border which the military installed a few weeks ago, in a way, making a stronger point for Trump’s insistence that a border wall is desperately needed at the U.S. southern border with Mexico to stop the stem of illegal migration.

President Trump and Democrats are currently at a stalemate over the$5 billion funding of the border wall which the later are refusing to fund.

Around 25 people were arrested including two teenagers, according to the CBP, who also said that President Trump’s proposed wall could have help in this case.