North Korea Thinks It Now Controls U.S. With Its ICBMs 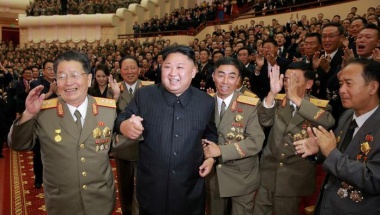 Pyongyang is not holding back but ramping up its nuclear-fuelled war-of-words with the U.S. this time warning Washington that North Korea’s latest military developments give its reclusive leader Kim Jong Un unprecedented clout in the current crisis.

On Friday, the state-controlled media published articles threatening to meet any further U.S. expansion in the Korean Peninsula with an equally opposing show of force.  The verbal threats have grown with each successful intercontinental ballistic missile (ICBM) test launch, the most recent being a hydrogen bomb in July and a second intermediate-range ballistic missile over Japan on Friday.

As President Trump and U.S. allies demand a total denuclearization of the rogue state, the rogue regime pushed back against any talks of bringing back U.S. nuclear weapons to the Peninsula.  Giving up its nuclear weapons is something which the regime insist is not negotiable, a conditions they seem intent to continue using in order to extort concessions from the United States.

The North Korean Foreign Ministry later responded with a statement to demands of denuclearization where they referenced the country by its official name – the Democratic People’s Republic of Korea (DPRK).

“The attempt of the U.S. to deploy tactical nuclear weapons into South Korea and develop up-to-date miniaturized nuclear bombs is targeted at its strategic rivals in the region as well as the DPRK, and it will increase the tension in the Korean Peninsula and the region and instigate intense arms race,” read the statement.

Friday’s launch was North Korea’s longest ever ballistic missile test flight with the missile travelling 2,300 miles over Japan before crashing into the Pacific Ocean. It follows North Korea’s sixth and largest ever nuclear test on September 3.

“Our final goal is to establish the equilibrium of real force with the U.S. and make the U.S. rulers dare not talk about military for the DPRK (Democratic Peoples Republic of Korea), said Kim Jong-Un.