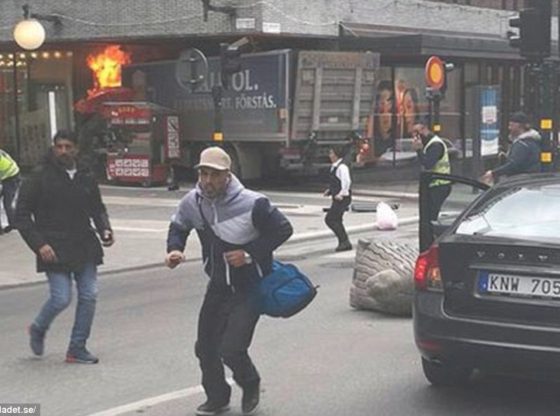 SWEDEN: A truck has plunged into crowds of people outside a busy shopping area in Stockholm.  The incident which involved a stolen lorry occurred outside a popular department store left at least 5 dead and a number of people injured. 1 arrest have since been made.

Swedish Prime Minister Stefan Löfven has referred to the horrific incident outside Ahlens department store a “deliberate terror attack”.  Police have evacuated and cordoned off large areas in central Stockholm.  The lorry belonging to a Swedish brewery company, Spendrups, is reported to have been hijacked.

The attack comes just a few weeks after a similar incident by an ISIS supporter in London.  Not an isolated incident, this appears to be the work of a copycat following a pattern of similar attacks in Berlin and London hitting soft targets in busy crowded areas.

Sweden like Germany, is a very liberal country that is averse to surveillance and strict immigration policies. With similar incidents becoming the norm in major European cities, many are blaming the continent’s lax immigration policy which has accepted huge numbers of immigrants unchecked in the last few months and years.

With Brexit and Donald Trump’s electoral victory, Europe finds itself facing a growing anti-immigration sentiment sweeping across the continent. Such sentiments are bound to grow if such incidents of terror claimed by ISIS and Islamic terrorists continue to happen.

Local officials maintain that  no person(s), group or organization has claimed responsibility for the terror attack at the time of filing this report.Sweden authorities say they have arrested one individual who is currently in custody.

The is a developing story and will be updated.