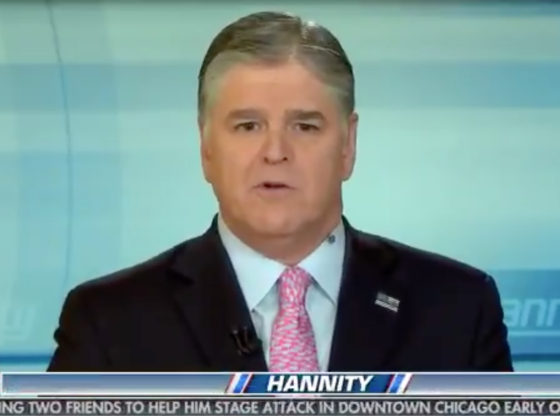 Call it creepy or whatever but very few people would have remained as cool, calm and collected as Sean Hannity did on Thursday evening during his primetime nightly broadcast on Fox News when  a huge creepy crawly bug made its way up from the collar of his shirt, across his neck, crawled towards his chin and then detoured up towards his mouth without the host even being aware of it.

But the viewers were very aware as social media quickly lit up with reactions and before long, the show was abruptly interrupted and went on commercial.

Sheww!!! That was the longest breadth ever held whilst watching something on television.

The funniest thing is that whilst the host didn’t notice the gigantic creepy crawly bug leisurely have a field day or call it a field-night all over him, crawling up his neck, chin and towards his mouth , diehard FOX News viewers already glued on to their screens noticed it.

Even those Fox News channel-hating liberals paid to watch the show only to look for mistakes in order to call for a boycott of shows and the outlet, also noticed the creepy bug.

The comments that followed were both sarcastic to downright ridiculous with a few expected absurdities from the usual culprits taking the incident as a moment to lay it on the host, Fox channel viewers and including their number one target, President Donald Trump, who, by some magical, unimaginable mechanizations caused the creepy multi-legged bug to crawl on Hannity and on LIVE TV unbeknownst to him .

To others, the entire ordeal was fun while to some, it was creepy.  However, to a select few, the entire scenario of a bug crawling across an individual was quickly taken to mean some twisted symbolic meaning of a spiritual proportion – that of evil versus good and judgement day for the “soulless” host whose sins of spewing so-called “un-PC” garbage every night had suddenly caught up with him.

Whatever one’s conviction, spiritual or not, one thing is certain.  The sight of that gigantic creepy crawly bug on anyone would have solicited a hysterical scream and with that, will undoubtedly linger in some poor soul with a vulnerable emotional memory.

Just the thought and the sight of the multi-legged freak crawling on that neck is enough to give one that creep-ish feeling that makes the shudder linger on long after the incident has passed!!