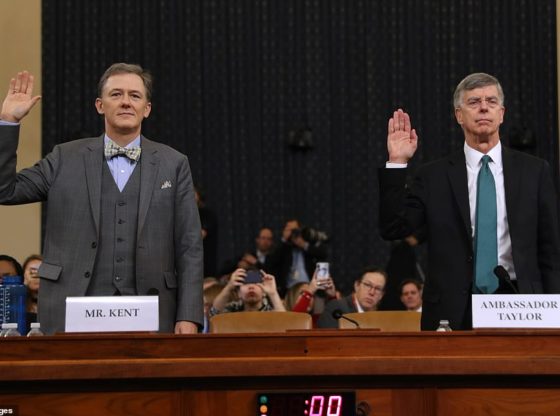 Week one of the first public hearings against President Trump by Democrats came and went without any sway or changes to public opinion.  What has changed, however, is the initial claim that launched this politically-motivated, highly-charged, well-orchestrated smear campaign and political hit-job to takedown a duly elected President by Democrats who are still unable to get over the huge embarrassment of losing the 2016 presidential election to the man they considered unworthy of the office of the President.

Unable to get any traction on the first week from the overly hyped and highly publicized hearings, Democrats together with their media allies immediately shifted their message and moved the impeachment goal post from the original charge of “quid pro quo” to bribery.  This sudden change came after it became clear that  the impeachment hearings which were touted as political blockbuster made for television, failed to deliver the goods as well as to create a dent in the polls.

Still without a solidly defined impeachable charge against President Trump, Democrats have since moved from a quid pro quo charge to extortion, and then to intimidation of a witness to now, bribery.

What needs to be understood is that the sudden change from a quid pro quo to a bribery charge did not come by as a result of an investigation or some form of newly discovered evidence.  Quite the contrary.

What happened is that the change to a bribery charge came after an impeachment focus group of independent voters from a major swing state and conducted by the media indicated that they found the charge of a quid pro quo very confusing and the latter much easier and relatable.

Now that Democrats have what they consider an impeachable charge, this  therefore sets the hearing agenda that is in reality, a search for a crime that will fit the new charge to hang round the President’s neck.

While the entire hearing process has already raised concerns due to its perceived unfairness, it has at the same time, lost legitimacy in the eyes of the public.  The fact Democrats are seen to be making rules as they go while also in search of a befitting crime to hang on President Trump – a feat that continues to elude them with each successive  public hearing, has not been lost to the public.

Another point that did not go unnoticed during the first week of the impeachment hearings is the role of the so-called three key or “star witnesses” who testified on the first two hearings.

Rather than have blockbuster hearings that had been hyped and promised to the public, what happened instead, was that the public saw three witnesses who turned out to be nothing other than disgruntled, long-term career diplomats and foreign policy wonks who believe that only they, not the President, determine and control foreign policy.

Ambassador William Taylor and foreign policy wonk George Kent who testified on Wednesday had their testimonies totally dismantled when cross-examined by the very effective Republicans on Wednesday.

Former Ukraine Ambassador, Marie Yovanovitch, on the other hand, who, by all indications was still visibly angry for being recalled from her ambassadorship position, turned out to be more aggrieved by policy differences with President Trump and his new Administration.

For the American audience that was watching and is keeping track of the proceeding, what those three witness and the Democrats actually exposed and accomplished was to prove that President Trump did not commit any of the many offenses they were accusing him of.  It also further solidified the belief that the impeachment saga was nothing but an internal coup by long-term serving, burrowed-in, career bureaucrats or “deep state’ as others would aptly call them, who believe they run things, not the President.

The two hearings so far have proven to be a total failure evidenced through low television rankings which told the entire story of how Americans feel about the democrats-driven impeachment hearing circus.  As numbers don’t lie, only 13.8 million viewers watched the first day of the hearings, a 19% drop from the 19.5 million who watched the Comey Hearings in 2017 and, according to The Hill, also 1.5 million fewer than the number who tuned in to watch the boring, first Democrat debates which wasn’t even broadcast by most major cable news and broadcast networks.

Even Donald Trump Jnr’s appearance at the controversial show, The View,  received a whooping 1.5. million more viewers than the impeachment hearings of his father.

According to the new Marist poll that was recently released, there has been no change in the polls despite having two widely publicize hearings.  Furthermore, while the first and second hearings failed to raise any new interest, it appears,  and from the looks of it that Democrats are losing this war. As a result of the low ratings, some network have chosen to pull the plug on the wall-to-wall coverage and focus on regular programming instead.

Although the Democrats’ case for a “quid pro quo” charge may have been blown apart by the initial voluntary release of the original phone transcript  by President Trump, it was the testimony of the three career diplomates that the entire claim fell apart.  It became clear that there is no “quo” for the “quid pro quo” and that no crime was committed particularly when the victim does not know he/she is being  extorted,

The focus is now on the next three hearing scheduled for this week.