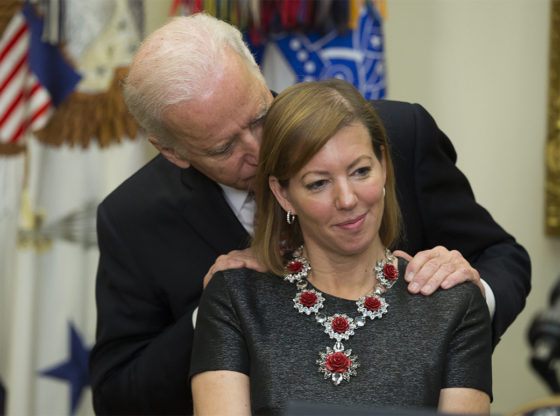 Call it the ghosts of the past or of the not-so-far past, they have come to haunt Barack Obama’s Vice President, Joe Biden, over his controversial behaviour with women and young girls over the years.

The scrutiny couldn’t have come at an inconvenient time as he explores whether or not to launch a bid for the presidency in 2020.

The new spotlight on the 76-year old Democrat political giant, former Delaware Senator and twice-failed Presidential candidate-turned VP is a result of the unusual “handsy” and “feely” nature of his interaction with women. This habit that has been the subject of harsh whispers in the halls of power in Washington, DC. earning him the nickname, “Creepy Uncle Joe.”

With the political season already in full swing, it was only a matter of time before Biden’s well-documented open-transgressions of being “too affectionate”…”touchy”…“feely”, stroking and disturbing “hair sniffing” controversies became a political albatross as it is now proving to be.

The criticisms and renewed scrutiny on Biden come after former Nevada Democrat lawmaker Lucy Flores made allegations against the VP accusing him of improper sexual behaviour against her will.

According to Flores, Biden invaded her personal space when he came “too close” from behind, put his hands on her shoulders, stroked and “sniffed” her hair against her will and then kissed her. before kissing her.

Describing the awkward incident as “power-play” by the Vice President of the Unite States, she claims the unexpected inappropriate behaviour  took her by surprise.

Although the former VP who is not yet technically a presidential candidate for 2020, he is toying with the idea of getting into the race. At it stands, he is currently considered a leading contender who is likely to be the Democrat nominee for President to face against the incumbent President, Donald Trump.

The defence of Biden by most Democrat lawmakers both male and female by claiming that it is who he is, a very “affectionate” and “touchy” man whose behaviour is both harmless and innocent has not gone unnoticed.

Furthermore, such statements defending Biden are exposing the hypocrisy of Democrats particularly after they claimed that every woman victim of sexual misconduct should be believed.

Although the party may want to downplay this issue in the hopes that it dies down, there is another huge problem for the Democrats.

There is more documented evidence against Joe Biden that is publicly available than there ever was on Justice Brett Kavanaugh whom they destroyed and crucified based on flimsy and unproven claims by a Democrat-supporting woman who had no evidentiary proof to support her claims.

Biden is no stranger to controversies.  Obama’s former VP has a known history of stripping and swimming naked in front of female Secret Service Agents, something which they, including their male counterparts often complained about.

With the political knives now aimed straight at the VP , the question is, why now?

The response is simple and very obvious.

This is straightforward demolition derby and a well-executed intra-party political hit-job by Democrats ahead of the 2020 presidential election in a fierce battle by candidates to be the party’s potential nominee to replace President Trump.

Unfortunately for Biden who comes from a different political generation, he doesn’t seem to understand what these women are saying.  He also seems out touch with the demands of the radical wing of the Democrat party whose “Me Too Movement” has become the proverbial monster that has turned and is devouring its own master.

The fact that Biden doesn’t seem to grasp the political impact, gravity and political liability of his behaviour in the current toxic political environment of the ‘Me Too Movement’ era, it is not surprising that some within the party are saying that he is not fit to run for office.

Whatever one thinks of “Creepy Uncle Joe” or the grave accusations levelled against him, he still deserves to be heard like everyone else and should be accorded the same right to defend himself until proven otherwise.