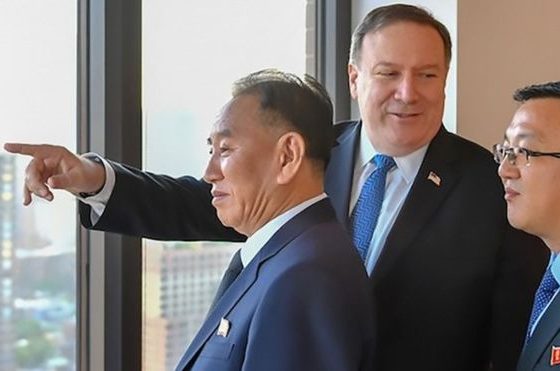 North Korea’s top diplomat has arrived in the United Stated.  General Kim Yong-Chol arrived in New York on Wednesday to meet with U.S. Secretary of State Mike Pompeo to discuss the historic U.S-Korea Summit that had been initially scheduled for June 12 in Singapore.

He flew in at New York’s JFK International Airport on Wednesday afternoon from Beijing on Air China.

The two top officials are scheduled to meet again on Thursday in a bid to salvage the highly-anticipated, high-stakes Summit which President Trump had cancelled last Thursday via a Letter citing “hostility” towards America by Pyongyang.

Secretary Pompeo who travelled to New York from Washington D.C. met briefly with his North Korean counterpart Yong Chol and had dinner at a New York apartment.

According to White House officials, the two have planned a “day full of meetings” on Thursday, with negotiations to determine whether a first ever, face-to-face meeting between President Trump and Kim Jong Un can be restored.

“If it happens, we’ll certainly be ready,” White House spokeswoman Sarah Huckabee Sanders said of the Singapore summit. Regarding the date for the meeting, she added, “We’re going to continue to shoot for June 12th.”

The former military Intelligence Chief and one of Kim Jong Un’s closest associates is the regime’s most senior official to visit the US in nearly 20 years after a travel restriction to the U.S. was temporarily lifted for this diplomatic trip.

After President Trump cancelled the June 12 summit citing “hostility” by NOKO towards the U.S., both sides have been working hard behind the scenes to revive the summit and hold it as planned.

If successful, the scheduled summit in Singapore could he a groundbreaking, first time ever, face-to-face meeting between a seating U.S. President and a North Korean leader in history.