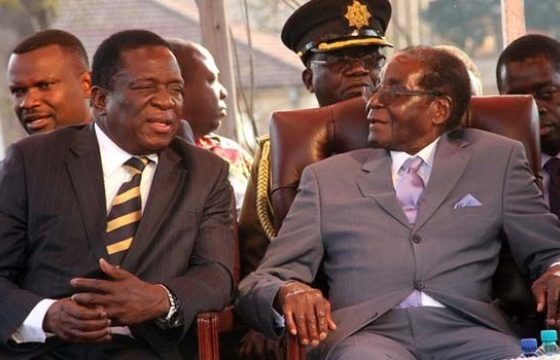 Emmerson Mnangagwa, the former Vice President and protégé of President Robert Mugabe was sworn in as the new President of the Republic of Zimbabwe on Friday, replacing his political mentor he deposed by military coup last week.

The 75-year old ruthless politician not well-liked in the country becomes the official second President of Zimbabwe since it attained its political independence from Britain, officially ending 37-years of the Robert Mugabe presidency.

The 93-year old former President and statesman was barred from attending after earlier reports had indicated he would be allowed to attend the inauguration in order to witness the swearing in of the man he once trusted.

According to sources, the invitation that was revoked had been an optic that was meant to send an olive branch to the millions of silent Mugabe supporters both in the country and across the Diaspora.

While some reports claim that “millions” attended the inauguration, an obvious deliberate misrepresentation intended to suggest that Zimbabweans by and large approved of the military coup, sources on the ground indicated that only tens of thousands of The Crocodile’s supporters that were transported from around the country barely filled the National Stadium in Harare.

Also present was Mnangagwa’s co-conspirator and accomplice in the coup, Zimbabwe Defence Forces chief, Commander General Constantino Dominic Guveya Nyikadzino Chiwenga, otherwise known as General Chiwenga.  There are whispers that the unruly General would like to be the Vice President to his now President long-time friend.

Members of Team Lacoste, a faction of the ruling ZANU (PF) aligned to the Mnangagwa-Chiwenga cabal were also present at the inaugural ceremony including members of the opposition party and foreign diplomats.

In his 30-minute inaugural speech, Mnangagwa spoke about the economy and fears over political uncertainty. In a shocking move that seemed to take a swipe at one of President Mugabe’s major policy, he extended an olive branch to white farmers who were dispossessed of their land under the land reform program, promising to compensate them for their losses.

Some would say, that statement among other controversial ones, was a complete turnaround from entrenched political views and ideology he has long espoused for the entire 37-years of his political life, a position taken simply for political expediency.

However, unlike the principled, political genius that is Robert Mugabe, he seemed to contradict himself at the same time.  He also seemed to say the land reform program initiated by President Mugabe would not be reversed as doing so would be akin to betraying the liberation struggle and revolution of the 1970s.

Any keen political observer listening to the speech would have scratched their heads in disbelieve at the political mishap and mixed messaging the statement sent to would be investors he was trying to court and convince that he was a man with a difference political dispensation.

He then went on to pay tribute to the elderly statesman and his mentor for over 37-years whom he forced out of office but still commands a huge following by saying,

“He led us in our struggle for national independence….Whatever errors of mission or commission that may have occurred during that critical phase in the life of our nation, let us all accept and acknowledge his immense contributions in building our nation,” he said of President Mugabe.

“To me personally, he remains a father, a mentor, Comrade-in-Arms and my leader,” a statement that will not only be challenged but Mugabe loyalists but is bound to evoke emotions to the manner in which the 93-year old President who was at the end of his term was deposed from power.

Emmerson Mnangagwa aptly named “The Crocodile” due to his subtle cruelty and ruthless political tactics, is not a popular or well-liked political figure in Zimbabwe.

Not only did he manage to dislodge Mugabe from power but the second Vice President Phelekezela Mphoko as well who is by law, supposed to be the right interim President until new elections were held next year or ZANU PF chose Mugabe’s successor.

So far, VP Mphoko has disappeared and has not been heard from since the Mnangagwa-Chiwenga led military coup.

Members of the G40 faction ZANU (PF) wing of the party that was aligned with deposed First Lady Grace Mugabe and of which Mphoko, Ministers Professor Jonathan Moyo, Saviour Kasukuwere, Walter Mzembi, Patrick Zhuwao and other senior government officials belong to, are systemically being purged from the party through arrests and torture by Gen. Chiwenga’s military henchmen.

Those who were outside the country during the coup have not returned. Those in the country have either gone into hiding or have disappeared while some were arrested and tortured.

Although one of Zimbabwe’s most feared security organs, the Central Intelligence Organization (CIO) is reputed for for its notorious intelligence gathering modes and technics, its boss, Director Albert Miles Ngulube barely survived a gruesome torture operation of his own in the hands of the more brutal military henchmen of General Chiwenga, to which which one of his men, a CIA agent only identified as Munedzi was reportedly killed.

Former Finance Minister Ignatius Chombo who was arrested, tortured and later released, appeared in Court on charges of bribery dating back as long as a decade ago.  Although he was shown being in the company of the Zimbabwe Republic Police, the Minister had been detained the entire by the military henchmen of Mnangangwa-Chiwenga cabal who had apprehended him during the course of the coup.

Meanwhile, the Zimbabwe Republic Police (ZRP) Commissioner, Augustine Chihuri, was openly booed at the inauguration during a speech where he was pledging his allegiance to the new president.

Observers attribute the hostility towards the Police Chief and his ZRP Police officers to the failed attempt to arrest Gen. Chiwenga upon his return to Zimbabwe from China where he plotted the coup.

This also explains why the military and not the Police were in control of the street all over the country during coup due to the animosity between the two security agencies.

The plot to arrest Chiwenga was thwarted after word got to the General and he therefore arranged to have his own military men waiting to pick him up at the airport instead of the Police or CIOs on Sunday, just 2 days before the coup.

Mnangagwa’s ascendancy to the throne of Presidency was welcomed by a 40% slump in the country’s main stock market index, the Zimbabwe Stock Exchange (ZSE) after two months of successive rise during President Mugabe and before the military coup that he and General Chiwenga initiated.