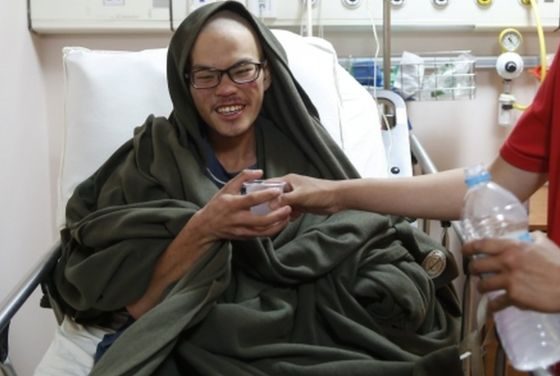 KATHMANDU – A 21-year-old trekker from Taiwan who went missing together with his girlfriend has been rescued alive in the Nepalese Himalayas 47 days after they went missing.  He was found with the body of his 19-year old girlfriend, Liu Chen Chun lying close-by who had just died 3 days before the rescue.

Asian Trekking Agency official, Madhav Basnet said Mr. Sheng Yueh was found on Wednesday on a ledge under the waterfall near Tipling village in Nepal’s Dhading district.  He was flown by helicopter to a hospital in the capital in Kathmandu.

The couple, 21-year old Liang Sheng Yueh and girlfriend 19-year old Liu Chen Chun were trekking on the Ganesh Himal trail, an unpopular and less crowded route when they were caught in a snowstorm in March and lost their way.

According to Mr.  Basnet, the couple has followed a river in the hopes of coming across a village.  Instead, somewhere along the way they slipped and fell over a waterfall at an altitude of 2,600 metres.  They had no porters or guides but had their own food, tent and sleeping bags.

For the first two weeks, they survived on food they had in their backpacks but after it was done, they survived mainly on salt and water, said the official.

After searching the area for 2 weeks, the rescue team suspended the search and resumed again on April 20, 2017.  It was then that they spotted a rent tent below and they climbed down.

“We found the man alive and able to speak to us, but the woman was already dead. We could not carry them so we called a helicopter,” Mr. Basnet said.

Mr. Liang is being treated at Grandee International Hospital in Kathmandu and is said to be out of danger.

“He can speak slowly. He told me his girlfriend died three days ago. He doesn’t have trauma injuries, but his body has injuries stemming from worm-bites,” said the doctor treating him to a reporter.  His hair was full of lice when he was found, and one foot was covered with maggots.

Last year, an Australian hiker who was lost in a remote Malaysian national park for two weeks said he resorted to eating wild ferns to survive.

A seven-year-old Japanese boy’s survival story last year in a bear-inhabited forest, after his parents left him by the roadside to discipline him, also made headlines across the world.