Trump Leaves Behind DC And Bad Weather For NATO In London 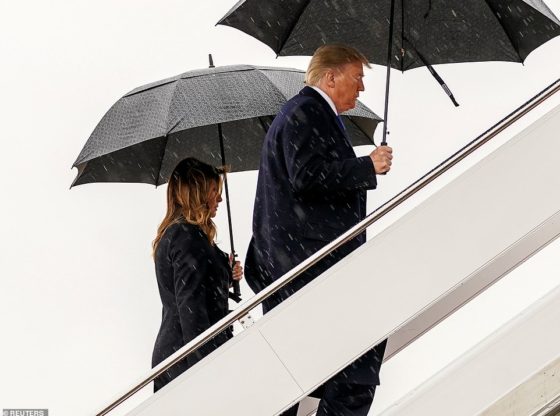 President Trump, the First Lady and some members of his Cabinet left DC early on Monday for London where they will attend a two day NATO summit scheduled for Tuesday and Wednesday.

The First Couple left behind bad weather and torrent rain, an irony not lost to the observer considering the metaphorical symbolism of Washington DC they are leaving behind.

The Trumps arrive in London on Monday evening at Stansted Airport where they will be whisked off to Winfield House, the U.S. Ambassador’s residence where they will stay during the duration of the Summit.

On Tuesday, President Trump is set to meet with other world leaders at the beginning of the summit while Melania Trump will hangout with other First Ladies. The schedule for her activities will in London is currently unknown.

Later in the evening, the President and First Lady will meet with Her Royal Highness, The Queen, at Buckingham Palace where she will host a dinner for all NATO leaders and their spouses including other officials attending the summit.

Prior to departure earlier in the morning, President Trump delivered some remarks to the media on the economy, impeachment and the upcoming NATO before him and the First Lady boarded Marine One, leaving the toxic environment that is the swamp, behind.

During the remarks, Trump unloaded on Democrats and excoriated them on what he called the partisan impeachment “hoax” designed to cast a cloud over his visit in London.

He accused Democrats of deliberately timing the hearings such that they coincided with the two days of the NATO summit with other world leaders and important allies of the United States.

The calculated ploy by Democrats to hold hearing during the summit has been condemned as unprecedented and a break away from long-held bipartisan tradition that politics should remain at the “waters’ edge” and never to be used against the President while on important foreign trips and while on foreign soil.

After the remarks and hearted exchanged with the media, President Trump later joined by First Lady Melania Trump made walked across the South Lawn where they boarded the waiting Marine One which.  Leaving the drama and hostile environment behind they were whisked them off from The White House on a short trip to Joint Base Andrews in Maryland where Air Force One was ready for take-off to the long flight to London, England.

Upon arrival, the First Couple will be taken to Winfield House, the official British residence of the U.S. Ambassador to the United Kingdom, where they are expected to stay during the course of the visit in London.