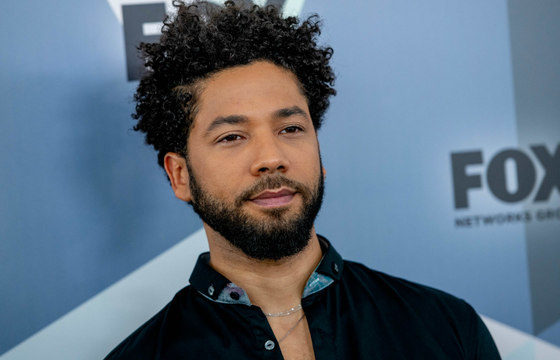 It’s been 2 weeks since Jussie Smollet, famous actor from  the popular TV series Empire, claimed to have been a victim of targeted racist and homophobic lynching by two white male attackers outside his apartment in downtown Chicago.

Smollet claimed that at about 2:00 am on January 29 he went to a 24-hour Subway sandwich shop near downtown Chicago where he lives.

It was on his way back home that two masked men believed to be white shouted racial and homophobic epithets at him including, “This is MAGA country” before tying a noose around his neck.

According to the actor, the perpetrators wearing President Trump’s now popular MAGA hats shouted racist and homophobic slurs, beat him up, poured bleach on him, tied a string noose around his neck and then yelled “This is MAGA country” before fleeing the scene.

Smollet is said to have left the noose around his neck for 45 minutes until police came. He is also reported to have taken himself to the hospital in perfect condition.

The actor also claims he wasn’t aware at first that he had a noose tied around his neck in the alleged incident which, according to him, may have lasted about 30 seconds.

To date, however, local police and detectives who have scoured the city for any corroborating evidence have not yet found or identified any perpetrators in relation to the alleged incident.

Furthermore, they have not found any video footage of the alleged attacks in a neighbourhood heavily festooned with cameras at almost every street, corner and buildings.

Speaking for the first time since the alleged attacks, Smollet told the host of ABC’s Good Morning America (GMA) that he is “pissed off” at the “attacks” and the attackers.

In the interview, what Smollet is angry about isn’t the actual alleged physical attack on him rather but the people who are now attacking him because they do not believe his story and are therefore accusing the actor of possibly fabricating the entire saga.

Smollet, who is a known Trump-hater has raised eyebrows after refusing to handover his mobile phone to investigators for further investigation.

With no suspect and continued lack of any credible evidence to support the allegations, Jussie Smollett’s story is not adding up but raises more questions than answers.

While it is increasingly appearing that the alleged attack may not have even taken place, or that it may have been staged by the actor himself, it is still surprising how most liberal mainstream media  outlets still treat this story as if it happened while at the same time continuing to blame the  yet-to-be proven attacks on President Trump.

According to one of Smollett’s neighbours who spoke on condition of anonymity to a leading tabloid, they do not believe the story to be either true or that it ever occurred considering the neighbourhood of the alleged attack.

The community and neighbourhood of the alleged attack where Smollett also happens to live is said to be half gay and the other half Black.  This, according to other unnamed local sources, undermines the entire premise of “the attack” and “the attackers” thereby rendering the so-called “pro-Trump” attacks by “white” Trump supporters in such a neighbourhood mute.

The scepticism on the entire saga which is shifting every minute and seems to be unravelling may also be due to the fact that Smollett is an unabashedly known Trump-hater who has not made secret his detest for the man currently occupying the White House and his supporters.

Furthermore, the actor has used the power of his status as both a popular star and a Black gay person to attack President Trump and his supporters on social media and at every turn he gets.