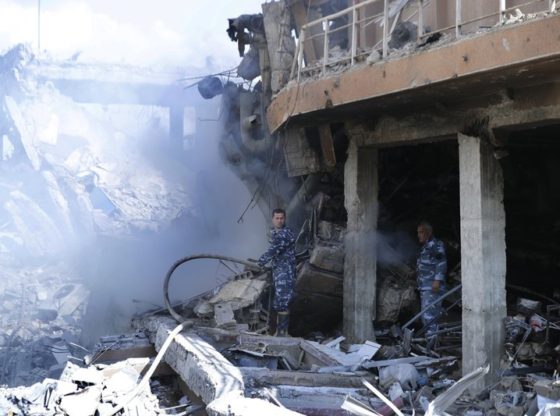 On Friday evening, the United States, Britain and France launched joint strikes on Syria over its alleged use of chemical weapons hitting three targets –  the Barzah Research and Development Centre in Damascus, a chemical weapons bunker and a chemical weapons storage facility near Homs. The strikes were carried out without waiting for the U.N. report to confirm the authenticity of the allegation.

Russia later rebuked the targeted strikes as “unlawful” and “illegal” because they were conducted outside the auspices of the UN and were launched even as a team from the Organization for the Prohibition of Chemical Weapons (OPCW) was in Syria to investigate the chemical attack claim.

A total of 105 missiles were launched against the 3 targets which, according to the Pentagon, “successfully hit every target.”  The US fired its missiles from 5 warships and a submarine while British forces launched 4 missiles from their bombers and the French launched 9 missiles.

The military strikes took place at 9:00 pm EST which was about 3:00 am Syrian local time.

“The use of chemical weapons will not be tolerated” said British Prime Minister Theresa May, pointing out that the limited strike was “not about interference in the Syrian civil war” or “regime change.”

“We believe the action was successful,” she added.

NATO allies gave their full support on the attacks adding there was no other practical alternative to the use of force which degraded Syria’s ability to carry out another chemical attack.

“To be silent and do nothing when chemical weapons are used with impunity, is unthinkable,” said NATO Secretary General Jens Stoltenberg while German Chancellor Angela Merkel called the attack, “necessary and appropriate.”

The decision to strike Syria by the tripartite western coalition was based on what happened in Douma on April 7 and mainly on the accounts of photos and videos shot by aid workers. The decision was also based on unspecified intelligence including additional open information.

Although the military action was deemed targeted, reports from other networks including BBC said that of the 100+ missiles fired, 70 of them were intercepted and shot down by Syrian forces, an account denied by both the Pentagon, White House and their western allies.

While the Trump Administration and its western allies declared “mission accomplished” on the Syrian strikes, there’s been criticism that the coalition strikes were  rushed without waiting for OPCW inspectors to begin their investigation into claims of chemical attack on Saturday.

Also, the western allies were criticized for not waiting for the UN Report on WMDs on Syria, prompting even more questions on the authenticity of the yet-to-be verified claims of the alleged chemical attacks.

The military strikes have raised questions over the failed system of international security as the UN is once again being rendered ineffective and useless in its core mandate to protect and prevent conflicts.

Both Russia and Iran called the use of force by the US and its western allies a “military crime” and “act of aggression.” There has been no retaliation to the strikes from the Syria’s major allies Russia and Iran.

The U.N. resolution calling for condemnation of the “aggression” by the tripartite coalition introduced by Russia over the weekend was rejected by the U.N. Security Council on Saturday.