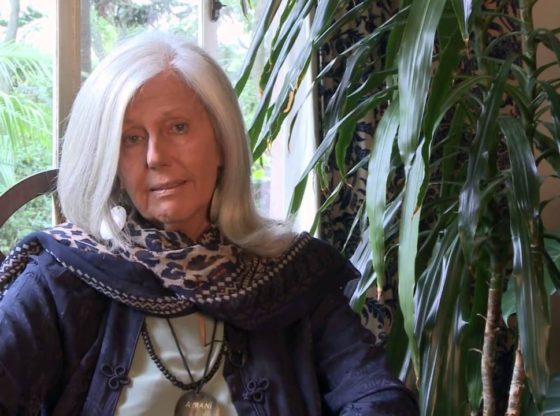 Well-known Conservationist and author Kuki Gallman was shot and  injured after being ambushed at her ranch by local cattle-herders in northern Kenya on Sunday, her daughter Sveva Makena, 26, said.  The 73-year old Italian-born author turned Conservationist is known for her 1991 memoir, ‘I Dreamed of Africa’ which inspired a 2000 movie by the same name starring Kim Basinger.

Local Police Chief Chepkowny said Gallman was patrolling her 100,000-acre private ranch Laikipia Nature Conservancy when her vehicle was ambushed and she was shot in the stomach by armed gunmen.  Her driver who also survived the attack drove her to the airport in Laikipia where was then airlifted to the capital, Nairobi for further treatment at Aga Khan hospital.

Currently, there is no confirmation on who the perpetrators are but according to deputy chairman of Laikipia Farmers Association, Richard Constant, suspicion falls on cattle-herders from the local Pokot community.  They have invaded Gallmann’s ranch several times in the past.  Lodges belonging to Gallmann were also set on fire by herders last month.

A wave of violence has hit Kenya’s drought-stricken region of Laikipia in recent months where scarcity of natural resources such as water an grazing land for their livestock is the source of conflict between armed cattle-herders from surrounding poor rural communities and private ranches. At least 14 people have been killed.

Some local farmers have also been victims of these ambush attacks. The source also told Reuters that 3 days ago in the same area a local man, Duncan Murimi, was shot in the stomach and killed by militias from the local Pokot tribe.  The armed militias stole nothing from him and they had no cattle looking to graze when they attacked and killed him.

Last month, British military veteran, Tristan Voorspuy was shot dead at a private ranch in Laikipia where he had gone to inspect the remains of a friend’s home that had been burn down by herders days earlier.  Mr. Voorspuy ran a safari company in Kenya.

Kuki Gallmann moved to Kenya in 1972 with her husband and son who later both died in separate accidents.  Her family owns about 360 sq km in Laikipia, which is a sanctuary to rare bird and wildlife, trees, flora and fauna. Her organisation also runs community, education, arts and sports projects.

The arson attack on Ms. Gallmann’s Mukutan Retreat last month left it in ruins. There were no visitors staying at the time.   Police believed that attack may have been in retaliation for a police operation that killed 100 cattle in the conservancy.

Kenya’s military and police have been working to disarm and drive the hundreds of herders and their animals out of ranches they’ve invaded, but their actions appear to have escalated the violence.

The herders accused police of trying to force them off the land by shooting their livestock. Police say the livestock were killed in crossfire with the herders, who were using the animals as shields.