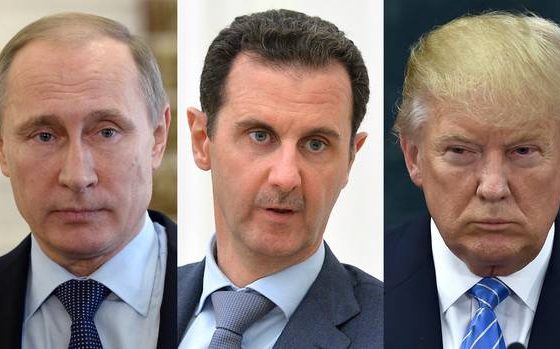 US Secretary of State Rex Tillerson arrived in Moscow on Tuesday with the hope of meeting President Putin to encourage the Kremlin to ditch its support for Syrian President Bashar al-Assad.  Putin snubbed President Trump’s top diplomat passing him to his Foreign Minister Sergey Lavrov.  Mr. Tillerson has made it clear he wants Assad gone while the G7 Ministers say there is no future in Syria with Assad still in power.

The mounting pressure on Russia to drop its strongest ally in the Middle East comes as G7 nations are united that the Syrian President must step down as part of a peaceful resolution to the country’s conflict.   This positon and other ultimatums have forced Putin to harden his support for Assad.

As Russian Foreign Ministry spokeswoman stating correctly ahead of Tillerson and Lavrov’s meeting that, “Travelling to Russia with ultimatums is useless.”

Tillerson wants the Kremlin to choose a side, either to align with the US and “like-minded countries” or “embrace Assad, Iran and Hezbollah.” Those who know Putin are concerned that any pressure or ultimatums will only harden his position and warn this isn’t the way to get him to the negotiation table.  They urge Tillerson and Washington to come up with something new if they are to get Putin’s cooperation on anything on strategic important to the US including fighting ISIS.

The relationship between Kremlin and Washington is at an all time historic low, with Russia saying the relationship with the US is the lowest since the end of the Cold War.  The problem with the two countries is that they are so far apart when it comes to Syria and their divergent positions make it almost impossible to agree on anything.

Tillerson and the United States have indicated they cannot normalize the use of chemical weapons which they believe was deliberate.  Putin and Russia on the other hand want an international probe into the chemical attack indicating the will urgently ask  the Organization for the Prohibition of Chemical Weapons – the global chemical weapons watchdog – to investigate the incident.

On Tuesday, President Putin said Russia has strong evidence that the chemical attacks was faked to implicate Assad and to manipulate the United States into attacking and removing Assad.  He also indicated of another plan to launch fake chemical weapons attack in Damascus and other parts of Syria.

Putin surprised everyone when he said Russia has information that the US is planning to launch another missile strike in Syria.

With such differences in positions, it  is unclear if Tillerson will meet with Russian President Vladimir Putin in Moscow who, from all indications, appears to have snubbed Trump’s top diplomat and instead let his Foreign Minister Sergey Lavrov to meet with him.  It seems Tillerson won’t be getting his prized meeting with Putin afterall, the man he claimed he knew.