Russia-Syria Warn The U.S. “We Will Respond” If You Cross OUR Red Line

Home /Featured, News & Politics/Russia-Syria Warn The U.S. “We Will Respond” If You Cross OUR Red Line 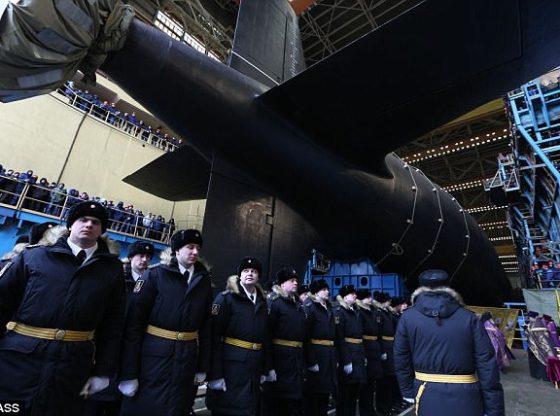 Russia and Iran have warned the United States they will “respond with force” if THEIR OWN “red line” is crossed should America strike Syria again. The warning comes after Donald Trump ordered a targeted, one-off military strike on a Syrian airbase, ramping up tensions in an already volatile Middle East.

Around 60 Tomahawk missiles were fired at a Syrian military base on 7 April in retaliation to an alleged chemical attack on civilians and children.  According to Reuters and other multiple sources, a joint statement said to be from a joint Command Centre in Syria issued the following:

“What America waged in an aggression on Syria is a crossing of red lines. From now on we will respond with force to any aggressor or any breach of red lines from whoever it is.”

The statement raises the prospect for war by accusing the US President of crossing the red line.  To up the ante, the joint warning from Russian and Iranian forces proceeded,  “We will respond with force…and America knows our ability to respond well.”

Iran on the other hand has gone further calling on Syria to “make America regret their attack.”   This followed a warning from Moscow to President Trump that Russia will respond with military action if Assad and his forces are attacked again.

Russian President Vladimir Putin has made no secret of his staunch support for Syrian President Bashar a-Assad.  This strong alliance between the countries has prompted a statement from the Russian Embassy in London that should Moscow be presented with an ultimatum over Syria, then there could be “real war.”

Both Russia and Iran have come out strongly in condemnation of the unilateral military strike in Syria supposedly in retaliation to a chemical attack in Khan Sheikhoun, an accusation the Assad government has denied.  These two Syrian allies have called for an objective investigation into the chemical attack.  No word or response either from Washington if they will support this.

The Russians also insist the chemical attack was a ‘false flag’ incident planned by Islamic Jihadists controlling the area.  This, they claim, was done in order to stir up tension between the Unites States and Russia.

The military strike which left 6 people dead infuriated the Russians who are now doing everything to shore up Assad and his government against further attacks.

US State Secretary Rex Tillerson will be Moscow in a few days.  Although falling short of accusing Russia of direct involvement in the execution and planning of the chemical attack, the talks are expected to be intense especially after Trump’s radical shift of positions which has puzzled everyone.

The United States has placed itself in a quandary after conducting the one-off strike on a Syrian airbase.  There are now expectations from both sides of the conflict land their supporters locally, regionally and internationally. Furthermore, the international community is watching and so are the rebels from both sides of the conflict.  At the same time, anti-war advocates are already up in arms while the warmongering Neo-Cons in the west are already salivating at the prospect of another war.

At the end, it comes down to Syria and the Syrian people and what they want.