America Grounds To A Halt On Beginning Of Trump Impeachment Hearing 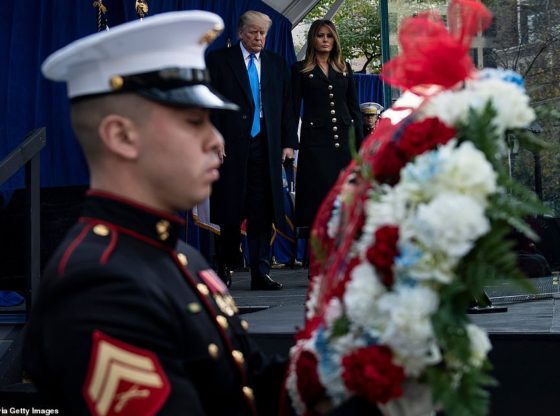 On Wednesday, America ground to a total halt as the most important political trial show in the world began – the first public impeachment hearings against President Donald J. Trump.

The event which has been aptly dubbed the political superbowl by the politically inclined such as the punditry class, the media and the self-termed political geeks who live and breathe politics, was broadcast live for all to see.

Almost every major broadcast and cable news network in the nation broadcast live the major political event of a generation.  Both Fox News and Fox Business networks, One American Network which is a Conservative outlet including the alphabet soup networks – ABC, CBS, CNN, MSNBC and NBC all had wall-to-wall coverage of the proceedings as soon as they began on Wednesday morning.

PBS and CSPAN which are still among the few trusted broadcasting networks as well as Newsmax, PIX 11 and Newsy carried the proceedings live.

Other networks such as RT (Russian), BBC News (British), BBC World as well as both CBC and Global News (Canadian), broadcast the impeachment hearings as they happened.

Everything stopped that day.  People either dropped everything they were doing or postponed commitments for another day. Some took a day off work while others called off-sick just to watch every minute and second of the impeaching hearing drama by House Democrats against President Trump.

For those who did not want to stay at home, there were bars and restaurants which opened early where impeachment watch parties were taking place.  To take advantage of the situation, those same businesses had specials for that day including drinks and meals whose named mimicked the event itself.

The proceeding against President Trump is the third one of its kind involving a seating US President.

The first live broadcast was that of Richard Nixon in 1974 which involved a crime by the then seating President.  According to Gallup Poll, an estimated 70 million people watched the proceedings live across the country, marking the highest television viewing rankings at the time.

The second was that of Bill Clinton (William Jefferson Clinton) in 1998.  As for the viewership, it was recorded to be even much higher than the first broadcast of the Nixon impeachment about two and a half decades earlier.

However, Unlike the first two where there had been solid evidence and crimes committed by both Nixon and Clinton, there is none in this case.  In fact, there is yet to be evidence of criminality to be presented against President Trump.

The initial crime of a quid pro quo which started this entire impeachment craziness fell apart the moment the actual telephone transcript was released by Trump himself in a daring and unprecedented move.  Once the content was reviewed in public, the entire quid pro quo charge by Democrats and which the impeachment process was predicated upon, totally collapsed upon further scrutiny and examination during the first hearing.

In fact, the outcome for the first impeaching hearing was rather an uncomfortable humiliation which forced the Democrats to later switch from quid pro quo to a new charge of bribery.

Besides, if there is no “quid” how can there be a “quid pro quo?” Furthermore, there can not be a crime if the victim, in this case the Ukrainian President, is not aware that they are being extorted.

However, with the current proceeding, there still remains a huge difference between what is going on now and the two previous impeachment proceedings of Nixon and Cinton.  While impeachment is a bipartisan effort which should have support from both parties, the Democrats and Republicans, the current process underway lacks such bipartisanship support thereby rendering it a partisan effort by Democrat.

Without bipartisanship, it is unlikely that the public and American voters will be swayed by the proceeding they view as a sham. At the same time, because of the perceived unfairness of the entire process, they won’t feel inclined to support that effort as the perception is that Democrats have no case other than a desire to remove a duly elected President from office whom they have made clear for the past three years they have a visceral hatred for.

Unlike Presidents Nixon and Clinton whose impeachments had bipartisan support because of the nature of the issues and crimes that were involved, the current process underway to impeach Trump is a purely partisan affair. The non-bipartisan effort is driven by Democrats who have wanted to undo both the 2016 election whose outcome they did not like and to end this Presidency.

Although the Democrats are the majority who control the House (Congress), they still required GOP backing to have a bipartisanship and a therefore, be able to have a legitimate impeachment process in place. While not a single Republican crossed over to the other  side to support the impeachment effort, two Democrat lawmakers did cross over and voted with the GOP against impeachment thus rendering the ‘against’ side a legitimate, bipartisan effort.  That is the vote they should have considered because Democrats lost.

In a not-so-shocking move and because the Democrats already have a predetermined outcome before the process has even begun, they instead, chose to ignore the bipartisan vote. They have proceeded ahead with a partisan effort to remove a duly elected President from office by a disgruntled party that has never gotten over losing the 2016 Presidential election to an outsider candidate.

Rather than be occupied with the unfair proceedings skewed against him in every way, President Trump and the First Lady Melania Trump chose, instead, to spend the first day of the public impeachment hearings working.

On Wednesday, they welcomed and hosted the Turkish President Recep Tayyip Erdogan and his wife Emine. It was a busy day which kept The Trumps focused on something else other than the impeachment hearing circus away from The White House.

As of today, the hearings have so far proven unable to sway any public sentiment to support the effort. If anything, the support for President Trump appears to be steadily growing as a result as the public sees more of the unfair process and the raw desire to remove him from power by any means possible.