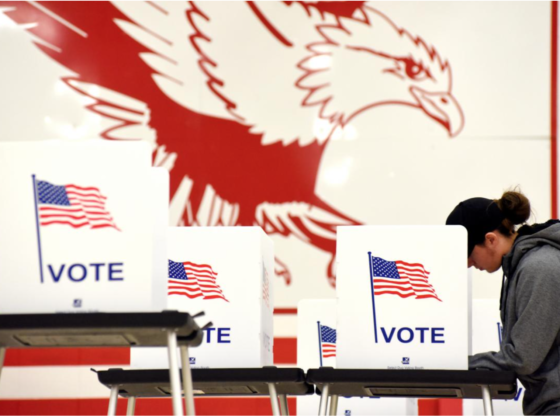 What a night it has been!  In what had become the most expensive, most covered and the most important U.S. midterm election in history, voters have finally spoken.  In the end, they opted for a divided government with the electoral outcome producing a split decision.

Democrats needed to pick up 23 seats to gain control of the lower house but eventually gained 26 seats and that number could still rise.  Republicans on the other hand surpassed expectation by not only retaining the Senate but gained 4 seats and could still gain another or 2 from the outstanding counts.

Not So Much “A Blue Wave”

What had been predicted by the elitist media and its punditry class and was wildly expected to be a Democrat “Blue Wave” only turned out to be nothing but a ripple.

Furthermore, what had been expected to be a total humiliation of Trump turned out not-so-bad for him but rather, it turned out to be a great night for his administration and the GOP.  Democrats underperformed while Trump and the Republicans outperformed than was anticipated.

Although Democrats did pick up 26 Congressional seats beyond the 23 that had been anticipated, it is nonetheless a very narrow lead with Democrats hanging by the thread. Unlike the 240 to 195 seats previously controlled by Republicans, Democrats control less.  Also, most of the seats gained were already in heavily Blue States and had been expected to be flipped.

Another blow is that Democrats also lost key Senate seats in pivotal swing states, giving the advantage to Trump and the GOP.

Although Democrats did pick up 26 Congressional seats beyond the 23 that had been anticipated and with that figure likely to grow, it nonetheless remains very narrow majority than had been predicted.  Also, most of the seats gained were already in heavily Blue States and had been expected to be flipped.

Instead of creating a “Blue Wave” Democrats suffered another blow as they lost key Senate seats in pivotal swing states like Florida, Indiana, Missouri and North Dakota with a chance of flipping another –  giving the advantage to Trump and the GOP

President Trump and the GOP may have made a strategic political calculation not to fight for the House and with that, they emerged victorious by retaining control and expanding their majority in the most important legislative house – the Senate.

Once again, in defying political convention, Trump managed to do something historically unprecedented.  No  incumbent President who lost  one house had gone on to retain as well as expand their majority in the other house.  Only Donald Trump.

Predictions that this was going to be an electoral evisceration and total humiliation of Donald Trump the candidate and flawed politician, the opposite proved true. In anything, he has emerged much stronger, powerful and could even lose less seats that his predecessors.

With the midterms over, the much-predicted fall and electoral evisceration of Donald Trump as a candidate and political figure proved wrong.  What emerged, instead, was a much stronger, more popular and powerful Trump with a new intense following.

The election also underscored the influence and effect of Donald Trump the person and the candidate that he cannot be underestimated.  If anything, what it proved is that, not only does he command a huge following but the still commands the GOP, too.

His personal involvement in carrying the senatorial and gubernatorial candidates to the finishing line.

All those who opposed and distanced themselves from him are out in the cold whereas those who embraced him made it.

Having been the most expensive midterm election in U.S. electoral history, as in 2016, Trump has once again proven that no amount of money or celebrity endorsement  matters. He is a brilliant campaigner, self-promoter, master brander and framer.  He is the best closer in the history of electoral politics,

In the end, American voters had the final say.  In their infinite wisdom, they voted for a divided govt to force a systems of checks and balances.  They voted for bipartisanship and compromise where they expect action and results, legislation and not investigation.  As is the norm, any party that fails to govern and falls short of doing so will be booted and replaced.