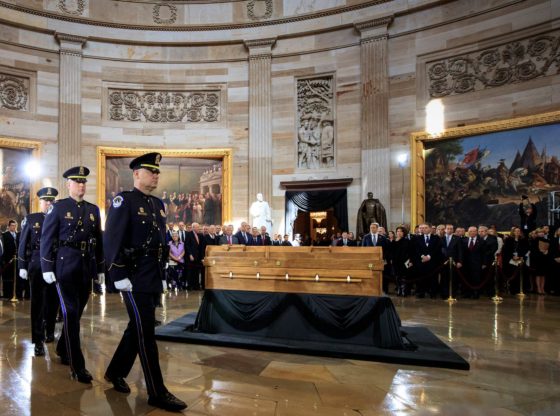 The late Rev Billy Graham’s remains now lie in honour at the U.S. Capitol Rotunda after spending the last 2 days lying in repose at the Billy Graham Library in his hometown in Charlotte, North Carolina.

This makes the world-renowned Evangelist the 4th private citizen to be granted the rare honour only reserved for the nation’s most imminent citizens.

From the Billy Graham Library, the late Reverend and Evangelist From a tent in Los Angeles He will lie in honour in the Rotunda on Wednesday and Thursday before his final burial on Friday.

When U.S. Congress granted the late Rev. Graham the nation’s greatest distinction to lie in honour in the Rotunda, they followed in the tradition started by Kentucky congressman Henry Clay in 1852, to pay tribute to the nation’s non-elected, most distinguished citizens.

This also makes “America’s Pastor” and the Evangelist the first Religious Leader to be accorded that honour and respect.

The Rotunda has long been considered the most prominent place to pay final respect to the nation’s most eminent citizens like Presidents and elected members.

The four non-elected, private citizens to lie in honour at the U.S. Capitol Rotunda are the late Evangelist, Rev. Billy Graham, Civil Rights icon Rosa Parks in 2005 and two former U.S. Capitol Police Officers who died in the line of duty in 1998.

Other non-elected officials who have lain “in state” include former FBI Director J. Edgar Hoover in 1972 and Pierre L’Enfant, a French Engineer and Urban Development planner who planned Washington D.C.

Difference Between “Lying In State” And “Lying In Honour”

The difference between “lying in honour” and “lying in state” is only in the language used otherwise the honours are essentially the same.

The honour of “Lying in State” is usually reserved for deceased Presidents and other elected officials whereas “Lying in Honour” applies to non-elected individuals who were outstanding private citizens to be accorded such a rare honour.

There are also differences in the ceremonies for each category.  The “lying in state” ceremonies usually for Presidents are accompanied by full Military Honours whereas the latter, the “Lying in Honour” ceremony only has Capitol Police detail.

Evangelist Rev. Billy Graham died on February 21, 2018 at his home after a long battle with Parkinson’s, cancer and pneumonia.  He was 99 years old. His funeral will be held on Friday in his hometown of Charlotte, North Carolina.