Majority of Americans Support President On National Anthem; Divided Over Firing Players Who ‘Take-A-Knee’ In Protest 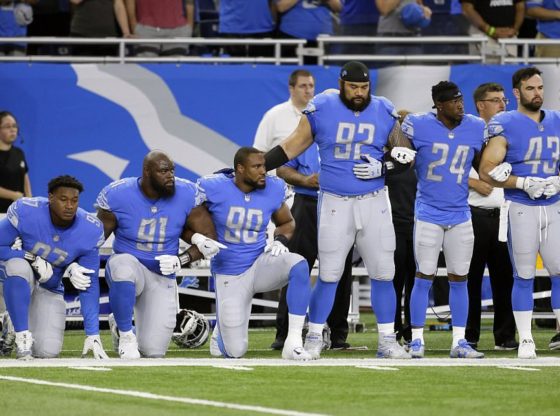 When President Trump suggested on Friday that National Football League (NFL) players “should be fired” if they refuse to stand for the National Anthem before major games, no one anticipated the response that would follow, with players and coaches coming together in opposition to the President.  Close to 200 players took a knee in protest to the Star-Spangled Banner and against the President.

Rather than forego the issue, the President has doubled and tripled down, calling on the NFL to come up with a policy and guidelines.  He called on the organization to set up rules that will mandate players to stand for the National Anthem and honour the flag.

“The NFL has all sorts of rules and regulations.  The only way out for them is to set a rule that you can’t kneel during our National Anthem!” he twitted on Tuesday morning around 9:00 am ET.

President Trump who is urging the league to show leadership know he is winning on this sensitive issue and will always have the public behind him and against anyone seen as being disrespectful to the National Anthem and country that has given them the opportunities to become multi-millionaires.

While over 80% of Americans are fully behind the President on this issue, there is, however, a divide along party and racial lines on whether or not to fire players that protest the National Anthem.

According to a Cato Institute poll released on Monday, 65% of Republicans agree with President Trump with 62% of Conservatives saying that players who ‘take a knee’ in protest should be fired.

On Monday, another new poll conducted by Fox News shows that over 94% of Americans are opposed to the ‘take a knee’ protest and want the NFL to start taking action in some form or the other and instill some order.

“Not wanting to fire NFL players because of their political speech doesn’t mean that most Americans agree with the content of this speech [taking a knee in protest]. Surveys have long shown that most oppose burning, desecrating, or disrespecting the American flag. Thus, Americans appear to make a distinction between allowing a person to express (even controversial) political opinions and endorsing the content of their speech.

A recent Reuters poll had similar findings, revealing that while 72 percent of Americans said ignoring the anthem was unpatriotic, 64 percent also said that those who chose to do so “had the right to protest under the U.S. Constitution.”  What they disagree with is the venue and the mode of doing so – using the National Anthem as a symbol of their protest.

NFL players who have taken issue with the National Anthem have drawn a variety of responses from Americans. Most fans are very angry, some are puzzled, some fiercely sympathetic and some neutral. And some fans are just plain melancholy.

“I was personally saddened. I did not watch the National Football League on Sunday, and it was the first time in 45 years that I made an active decision not to watch, including my team, the Pittsburgh Steelers. It was not a decision made in anger. It was genuine sadness. I realized that I can no longer look at this game and watch this game and study this game and pretend, fantasize — everything a fan does. This whole thing has removed for me the ingredients that are in the recipe that make up a fan,” Rush Limbaugh told his audience Monday.

“The mystique is gone. That actually started vanishing a while ago. The larger-than-life aspect of it is gone. The belief, the wish, the desire that the people in the game were the best and brightest and special, and that’s why they were there, that’s gone. And it’s been politicized. It has been politicized and corrupted, and it didn’t start this weekend. It started years ago.

After President Trump’s speech and tweets, some NFL teams and players with the support of their owners decided to protest the National Anthem and flag by taking a knee rather than stand in honour.  Others like the Seattle Hawks, Pittsburgh Steelers and Tennessee Titans chose to forego the opening ceremony and stayed in their lockers while the Star Spangled Banner was being played.

While critics of this President led by most in the mainstream who hate him with a passion have tried to turn this into a racial issue, he rejected that portrayal saying, “The issue of kneeling has nothing to do with race.  It is about respect for our country, Flag and National Anthem. The NFL must respect this!” tweeted President Trump.

The Twitter hashtag #StandForOurAnthem was inevitable.  It now joins other new hashtags like #TakeaKnee, #TaketheKnee and #ImwithKap as social media reference for the NFL patriotism question. “Kap” refers to Colin Kaepernick, the former 49er and Super Bowl quarterback who originated the idea of kneeling during the playing of “The Star-Spangled Banner.”

President Trump endorsed the #StandForOurAnthem hashtag on Monday and it quickly started trending.  The hashtag first appeared on Twitter in late August of this year.