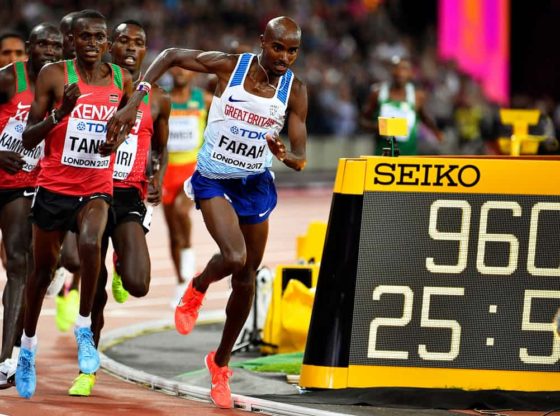 BBC Sport –  Mo Farah lit up the London Stadium once again as he survived a brutal collective effort from his rivals to storm to his third consecutive world 10,000 metres gold.

Roared on by a capacity crowd as loud as anything experienced here during his Olympic triumphs five summers ago, the Briton almost fell twice late in the race as an epic contest developed, before kicking down the home straight in trademark fashion to finally pull away.

These are Farah’s final track championships, and not since his golden run of victories began seven years ago has he been tested like this.

Yet he proved himself equal to those physical and tactical challenges, his young son and three daughters joining him on the track afterwards as the celebrations rolled around the arena.

The time reflects the pressure Farah was put under, the pace surging in the middle stages, the moves coming from all around as his rivals threw everything they had at him.

Much has changed since 2012, with Farah’s controversial coach Alberto Salazar the subject of an US Anti-Doping Agency investigation, but this felt like a throwback to those golden nights in east London, the stadium awash in partisan fever and Union Jacks.

As he came out onto the track for the start Farah had gestured at the crowd for more noise, and he did so again as the contest began to develop.

Coming into this final he had eight consecutive 10,000m victories under his belt, including gold at the Olympics in 2012 and 2016, two golds at the Worlds and another at the European Championships.

And from the start his rivals looked to work together to upset his plans, Cheptegei and Kenya’s Geoffrey Kamworor taking the field through the first 1,000m in a brisk two mins 39 secs.

Farah was content to sit in sixth and seventh as Eritrea’s Aron Kifle then took it up, followed by Uganda’s Timothy Toroitich and then Cheptegei again, and only at 800m did the 34-year-old make his move.

With 600m to go Farah still led, and he would not relinquish it despite being tripped so badly with 300m left that he took a step off the track.

But there was no stopping him, the capacity crowd screaming him home once again.

He told BBC Sport: “I had to get my head around it and I got a bit emotional at the start. I had to get in the zone.

“It wasn’t an easy race. I work on everything and it’s been a long journey.

“What a way to end my career in London. It’s special.

“Anything is possible in life if you train hard. To all the kids out there, if you want to be like me it is possible if you work hard.”

Article by Tom Fordyce  for BBC Sports in London